During September, newsfeeds were full of messages about the state of coal stocks at TPPs and how responsible departments were concerned.  Kosatka.Media figured out what is wrong with coal, why it is of concern, how and what it will affect and what to expect.

What's the problem with coal this year?

On the eve of the new autumn-winter period, Ukraine did not accumulate enough coal in warehouses to safely pass the winter. The Ministry of Energy and Ukrenergo appear from time to time in the news with reports on the state of accumulation and statements such as "the situation is critical" or "the situation has improved slightly."

Although the situation for thermal power plants looks a bit better than for combined heat and power plants, there is not enough coal for both types of power plants.

In the short term, this does not threaten the Ukrainians. But if coal is not accumulated, there is a risk of getting problems with uninterrupted power supply in winter. 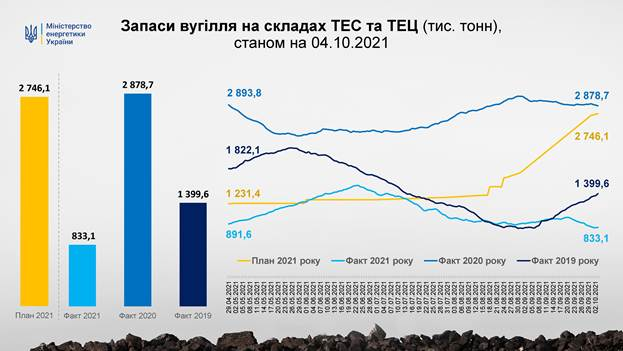 Why do we need coal?

Also, the operation of TPPs is important for balancing the power system: in cases when consumption exceeds the production of electricity or vice versa, it is TPPs that can quickly stop or start work to either give more electricity or less.

Why was not coal accumulated on time?

The easiest way would be to explain the situation by small production. However.

According to the Ministry of Energy, for 7 months of 2021 coal mining enterprises of Ukraine produced coal by 1924.0 thousand tons (or 12.2%) more compared to the corresponding period last year.

The already accumulated coal is used for the operation of thermal power plants to provide the Ukrainians with electricity. According to Ukrenergo, at the end of September, electricity production at the TPPs increased by 8% to 609.500,000 kWh. The production of other types of generation has decreased: renewables - by 23.5%, CHPs - by 4%, NPPs - by 0.1%. At the same time, consumption increased (+ 0.6%). The share of TPPs in covering the load increased to 24%. Accordingly, TPPS needed to burn the already prepared coal to continue working.

What are the authorities and energy companies doing to provide us with coal?

At first, there was an idea to save the situation by importing coal. At the end of August, Energy Minister Herman Halushchenko announced that Ukraine needs to import approximately 3.5 million tons of thermal coal during the coming heating season. He noted that the generating companies both DTEK and Centrenergo began to conclude contracts for the import of coal.

Indeed, imported coal began to come to Ukraine. But at the end of September, Ukrenergo stated that imports had not significantly improved the situation.

Why did not it help?

As the Head of the Energy Sector of the BRDO Efficient Regulation Office Anton Zorkin explained to Kosatka.Media, with an average daily expenditure in the winter of 70-80 thousand tons of coal, the volume of imports announced by the minister will be enough for about a month and a half of work. In other words, the main source of fuel must still be the domestic mines. The fact that imports do not lead to an increase in stocks indicates that the power plants are operating "on wheels" - they spend all the coal that comes.

In general, the import substitution policy is not a good solution, the expert says. This is especially true for energy markets and especially for our country. In recent years, coal has been imported from the Russian Federation, Poland, the USA, the Republic of South Africa, Kazakhstan and others. Import risks are that coal supplies from the Russian Federation (the share in the total import volume is more than 50%) can be stopped at any time, and transit from Kazakhstan is blocked by the Russian side, and in the event of an aggravation of the confrontation, the sea route of delivery may also be under threat.

Even though, the Ministry of Energy does not see any particular problems with the accumulation of coal reserves. According to First Deputy Energy Minister Yurii Vlasenko, "there is still a lag behind the planned coal accumulation indicators, but generating companies are determined to increase the supply of coal products."

And in the new heating season, the ministry is counting on “certain achievements”. In particular, they want to "load" the NPP more to work with at least 14 units out of 15 operating. And also, if necessary, especially in December-January, they plan to connect the 15th nuclear unit to the system (usually 11-12 units are in operation).

Ukrenergo noted that in general, the situation with preparations for the passage of winter is controlled, the energy system of Ukraine is quite balanced.

Does the TPPs' issue concern the whole sector or only TPPs?

Lack or limited coal stocks for thermal power plants is an issue for the entire energy system, experts say. Since TPPs mainly operate in the peak and half-peak parts of the load schedule, when there is high or very high consumption of electricity, they allow the power system to operate in a normal mode, or, without outages.

One more point is the shutdown of the TPPs will lead to an underproduction of electricity, which affects its price (less supply with growing demand in the winter period will lead to the price increase). This will be included in the cost of the products of enterprises, and, consequently, the prices for goods and services for all consumers will rise.

Well, the shutdown of the TPPs will also prevent them from earning money, which could later be used to buy coal and modernize production.

Can nuclear power save everyone?

Regarding rescue nuclear power plants, it is all about the specifics of the operation of each energy source. A nuclear power plant produces energy on a uniform schedule. On the other hand, a thermal power plant can change power rather quickly, that is, produce more or less electricity, depending on consumer demand. In the energy sector, this is called “balancing the change in demand”.

In Ukraine, there is already a significant deficit of regulating (balancing) capacities, therefore, “replacement” of TPPs with NPPs painlessly for the energy system is impossible. In this case, it is necessary to substantially equalize the load schedule of the UPS of Ukraine, that is, to apply consumption restrictions, in simple words - to turn off the electricity.

In addition, there is a risk that the NPP will not be able to cope with such a load. Olрa Kosharna, a member of the Board of the State Inspectorate for Nuclear Regulation, considers the statements of the Ministry of Energy about the commissioning of all nuclear power units to be PR. Although he admits that they will be able to launch the announced number. But if the unit is being repaired, and this is 1 GW of capacity, then there will be a collapse. And this can happen, according to the expert, because there are serious questions to Energoatom about the reliability and legality of its purchases of spare parts.

If there is not enough coal, will we not be left without electricity?

The Ministry of Energy assures there will be electricity. In particular, during the “Hot Autumn” forum, Deputy Minister Vlasenko again noted that in the event of a coal shortage, nuclear power plants would be actively involved in the work. The ministry also believes that thermal power plants will be able to operate on gas instead of coal. However, this is a rather illusory prospect, given the tremendous rise in gas prices.

Vlasenko also noted that although the current situation is called "the most critical in history," Ukraine has already had to go through a crisis, in particular, in 2019. Therefore, the Ministry of Energy is determined to prevent a crisis, they say - not for the first time.

But Anton Zorkin stressed that this approach is not a normal practice for the power system. The Ministry of Energy approves a coal accumulation schedule for cogeneration and combined heat and power plants to rely on certain amounts of electricity to be produced by each energy source in a certain period.

Reduction of coal mining and reserves, stopping or going out for repairs at NPP and TPP units, as well as a sharp change in the average daily air temperature, lead to a shortage of generating capacity in the country's energy system, and, as a consequence, to the risk of limiting the load on consumers.

As for the situation in 2019, as of October 5 of this year, coal reserves at CHP and TPP are 841.2 thousand tons, which is almost 2 times less than in 2019, when there were 1405.8 thousand tons of coal. Therefore, the current problem is deeper than two years ago.

To sum up, the Ministry of Energy has some kind of vision of how to prevent blackouts in winter. But such "fire extinguishing" is definitely not the norm for the stable operation of the power system.