Ukrainian producers of renewable electricity, to which Guaranteed Buyer owes more than UAH 24 billion, began to seek compensation through the courts. The first such decision was received by Unitary Energystandart company. The Economic Court of Kyiv ordered to return UAH 1.36 million to the company.

Lawyers talk about “average” chances of getting “green” money back. However, class actions and appeals to international arbitration can significantly increase chances, although they have their own nuances.

Kosatka.Media tells what you should know before suing the state.

"The author" of the judicial precedent is Unitary Energystandart, which manages four mini-hydro electric power plants with a capacity of 175 to 600 kW in the Sumy and Chernihiv regions. After Guaranteed Buyer owed it UAH 2.2 million based on deliveries in March (695.5 thousand kWh), the company filed to the court.

Guaranteed Buyer was partially able to pay off the debt, and by the time the court decision was made, it had dropped to UAH 1.36 million. On September 22, the Economic Court ordered to return the debt and reimburse the court fee of UAH 20.4 thousand.

But the company did not receive the money – on October 8, Guaranteed Buyer asked the court to postpone the decision to pay the money for up to 1 year. The consideration of this appeal was scheduled for October 27. 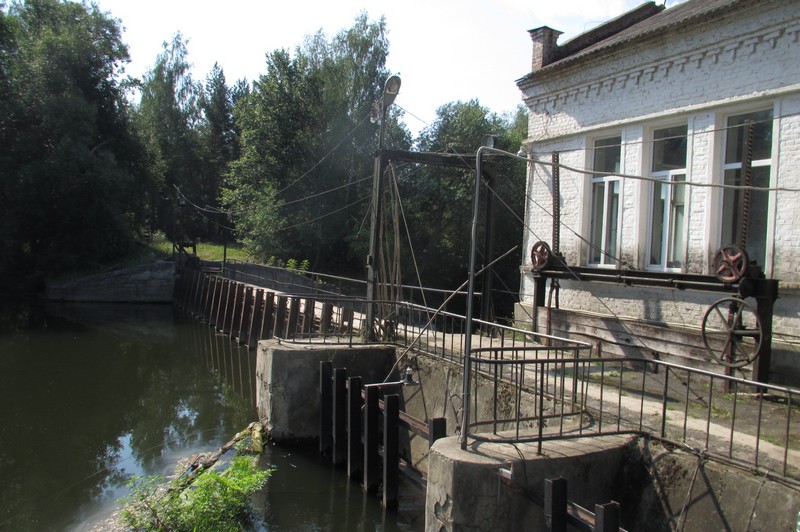 As Yurii Kasich, director of Unitary Energystandart LLC told Kosatka.Media, this victory concerns only the debt for March. His company is suing for payments from April to July – for a total amount of about 10 million hryvnias. Debt for each month is a separate process.

“As soon as there was a debt that I could confirm with documents, I went to court. A debt for March arose in April, and I went to court. In May, a debt for April arose – I filed a lawsuit again,” Kasich explained.

According to him, he did not notice any bias on the part of the court. However, he believes that Guaranteed Buyer was constantly trying to drag out the process, demanding to involve third parties – NEURC and Ukrenergo.

“I think that consideration of other claims will not be quick either. Will the state give this money? I don’t know. As far as I know, there is no source of repayment of these debts,” Kasich summed up.

Due to debts, renewable energy producers began to have problems

Since the state has not returned the money to the renewable energy producers for more than six months, they are experiencing serious difficulties.

"Firstly, I have to pay people a salary. Secondly, I have to keep the structures safe. A hydroelectric power plant is not a solar farm that can simply be stopped. It is a dam, and something can happen to it. I have to invest in current and major repairs," said Yurii Kasich. 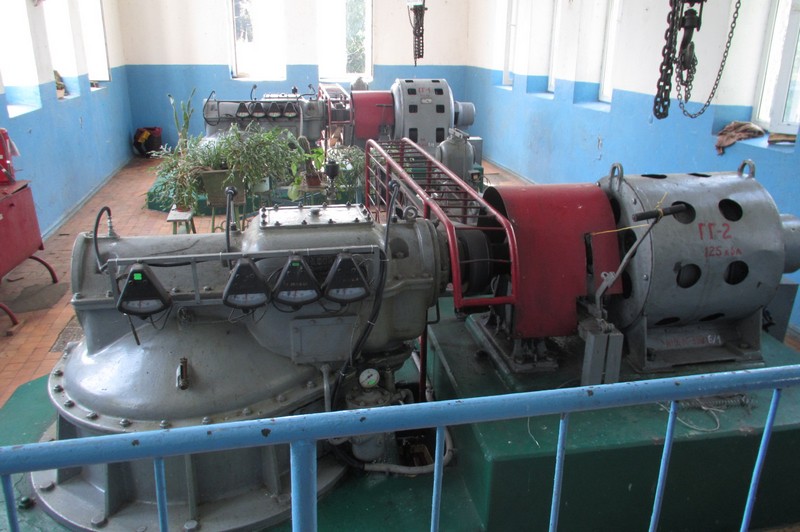 So far, he has been able to borrow money, but he does not know when he will be able to return it.

"What should I do if I have no hope that they will be returned? Banks said:" What can you give on bail? "They are not interested in my property, but they do not want Guaranteed Buyer’s debts as a guarantee because they also do not consider it a reliable client. And I'm not alone," Kasich summed up. 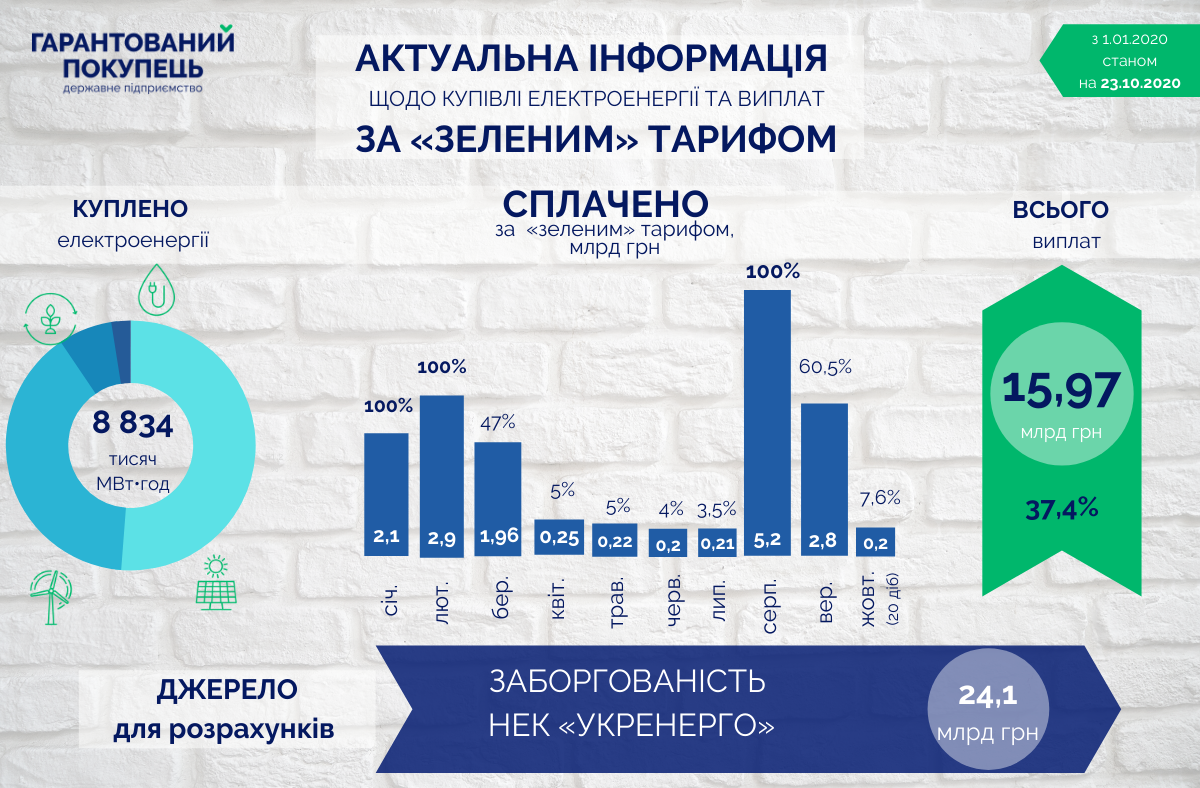 Debts to renewable energy producers as of 23 October. Infographics: gpee.com.ua

How to sue the state for money

The grounds for suing Guaranteed Buyer in economic courts are the FIT norms enshrined in the laws, their size, and the promise to buy the entire volume of "green" electricity.

Besides, manufacturers have a theoretical opportunity to get the court to recognize the reduction of the FIT unconstitutional. However, this is a challenging and expensive path.

"The agreement for the sale of electricity at the FIT refers to legislation. There is no established tariff. If the legislation has changed, then Guaranteed Buyer must buy electricity at a new tariff. Potentially, the electricity producer can prove that the law's norms, which reduce the FIT, is contrary to the Constitution through administrative proceedings. Accordingly, the administrative court can appeal to the Supreme Court, and the latter to the Constitutional Court and demand the corresponding changes to be declared unconstitutional. But we do not know if this mechanism works, although it appeared recently in the legislation," said Maksy Sysoev, lawyer, at the SEF&CISOLAR 2020 forum. 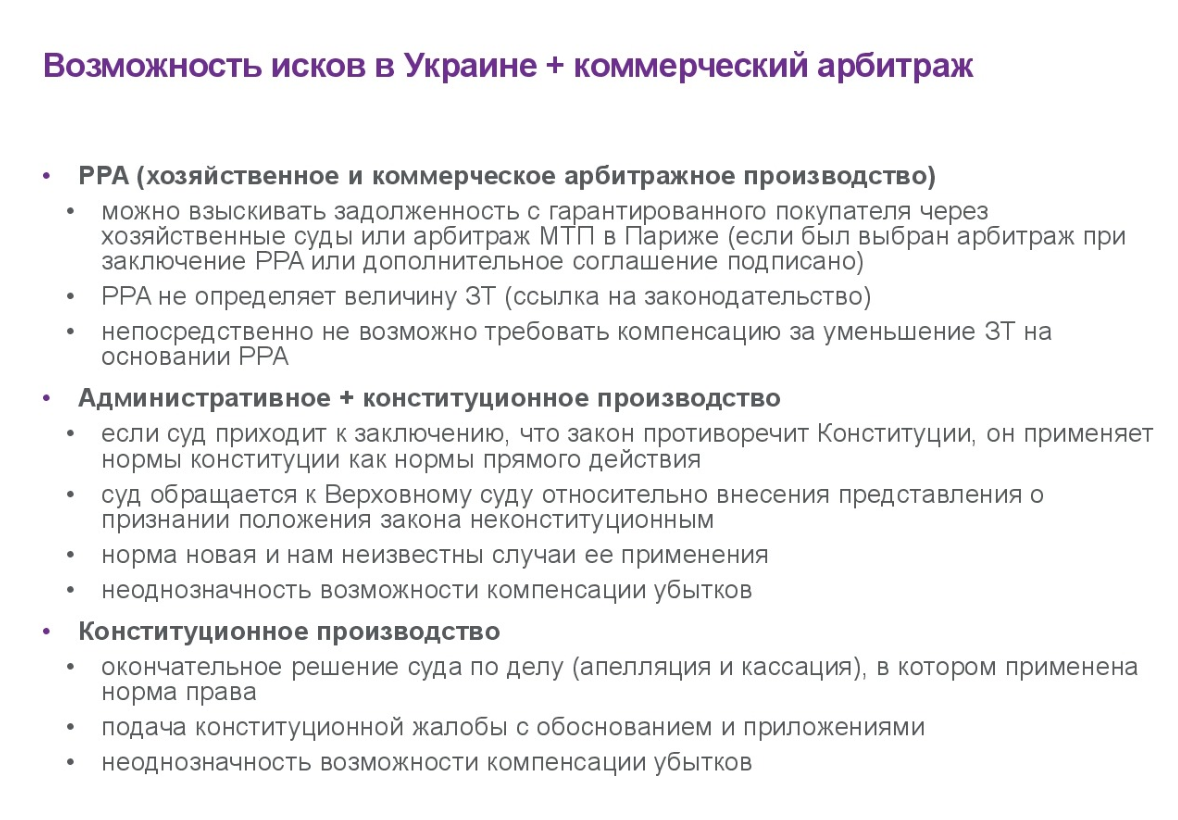 How to sue the debt for renewable electricity in Ukraine. Photo: SEF&CISOLAR 2020

Another option is that a company, having passed all instances in an administrative or business case and not having achieved a positive decision, may itself apply to the Constitutional Court. However, it isn't easy to count on a positive result.

Also, renewable energy producers can try to recover debts and compensate for losses caused by changes in legislation in international investment arbitration.

However, the company that will file the claim must be located in a country covered by international investment protection treaties or the Energy Charter. Tetiana Mylenka, Advisor to Hillmont Partners Law Firm, Head of Energy Practice, recalled that investors had the right to claim compensation for several types of losses (however, not only these):

It should be borne in mind that participation in arbitration will not be cheap: we can talk about millions of euros. Considering that the average size of Ukraine projects varies between 10-25-30 MW (this is not much), class actions may be the best option for them. 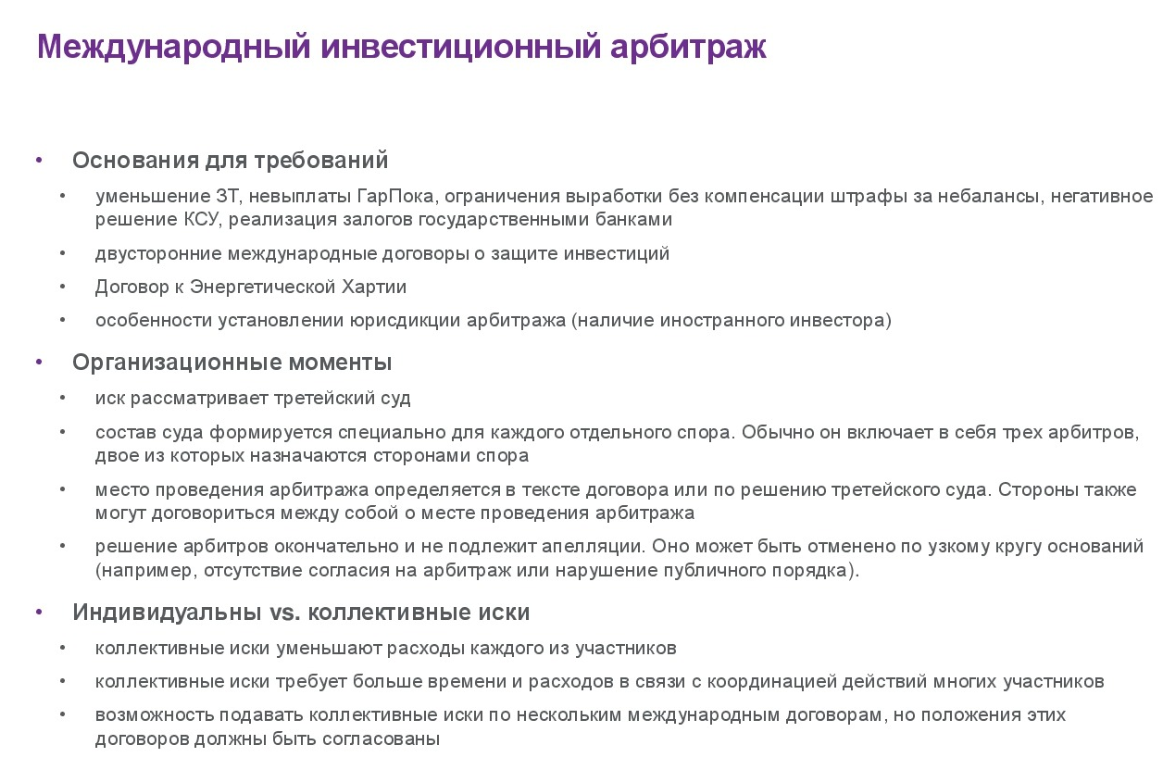 How to sue debt for renewable electricity in international arbitration. Photo: SEF&CISOLAR 2020

"Of course, it is more convenient to go to court with your own strategy when each participant does not coordinate their actions with anyone. But class actions are more financially effective," Sysoev explained.

The disadvantage of class action lawsuits is that it takes more time to coordinate.

“Under the Energy Charter Treaty, it is possible to consolidate several investors' claims with the same situation into one arbitration. Each individual claimant must still prove the right to jurisdiction, liability, and damages. Collective claims can reduce the costs of arbitration for each individual investor. Particular attention should be paid to determining the strengths and weaknesses of the situations of individual investors before the consolidation of claims," said Tetiana Mylenka.

According to lawyers, it is expected that one of the Ukrainian companies will file an individual claim to international arbitration soon.

How long can a court take?

Consideration of a claim for compensation of debts in a Ukrainian court of the first instance can last up to six months. The term may be affected by quarantine restrictions. The appeal can take 2-3 months.

In the case of international arbitration, the Energy Charter Treaty provides for a 3-month cooling off period between the sending of the trigger letter and the initiation of the claim.

After the trigger letter and the 3-month cooling off period, the investor can initiate arbitration by submitting an arbitration request. After submitting the request for arbitration, the arbitral tribunal can be established in about 3 months.

Each party is usually given the right to two written submissions, with a disclosure period in between. Typically, this process can take from 12 to 18 months after the composition of the arbitral tribunal.

"If the company goes against Guaranteed Buyer in international commercial arbitration, then it can last 1.5-2 years. If we are talking about investment arbitration, then everything can be much longer – 3-5 years. Then you will need to go to the Ukrainian courts to confirm this decision," Yaroslav Petrov, a lawyer on energy issues, said during the SEF&CISOLAR 2020 forum.