Gas meters used by Ukrainians in everyday life require periodic verification in laboratories. Instead, consumers are given a counter from the exchange fund, or a temporary jumper is installed. However, for some people, after the checks, the meters may begin to charge more gas than before - which is why consumers suspect gas workers of "twisting".

But if there are no problems, consumers still have many questions - after how many years the gas meter is calibrated, at whose expense, is it necessary to remove the meter, and how is the payment for gas done during verification.

Kosatka.Media answers these questions and tells what happens in laboratories, where you can independently verify the meter yourself, and what modern methods of examining measuring instruments are already in Ukraine.

What is gas meter calibration and how is it carried out

The purpose of the verification is to find out how accurately the meter works. For this, there is a special technique - a certain volume of air (for example, a cubic meter) is passed through the meter and they see if its error goes beyond the permissible limits.

If everything is fine, the meter is returned to the owner or given to another consumer. When there is an error, they try to adjust it. If this is not possible, the counter is disposed of. In this case, there are no sanctions for the consumer.

Many consumers are concerned about how to pay for gas when the meter is in operation. The law says - calculations are carried out depending on the average monthly volume of gas consumption for the same period (heating or inter-heating) of the previous year or the actual period of consumption (heating or inter-heating) if it is less than six months. 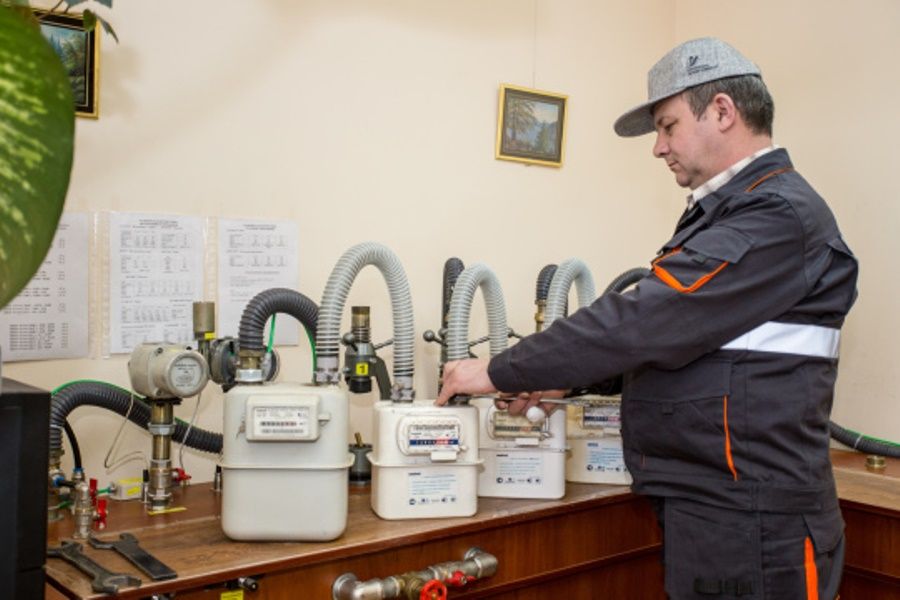 Checking the gas meter in the laboratory. Photo: 104.ua

In whose favour the meters "lie"

During operation, the counter mechanisms wear out, and their measurements become less accurate. It is interesting that they "lie", as a rule, in favour of the consumer - this is the peculiarity of the internal "mechanics" of devices.

On average, the error is from 3% to 10%, although the journalist Kosatka.Media in the metrological centre in Kharkiv saw such that they missed as much as 27% (!) Of gas. That is, almost a quarter of the gas volume was consumed by its owner for free.

The magnitude of the error depends on the conditions of use of the meter - whether it was, for example, indoors or outdoors, and on the features of its design. As explained by gas workers, earlier some models of meters were produced with oil seals, which periodically had to be lubricated. If this is not done, the measurement accuracy will deteriorate.

Naturally, after replacing the defective meter with an accurate consumer, he may decide that the regional gas has twisted something in it - after all, the device will begin to show larger volumes than before. However, in reality, the meter will record real consumption, whereas previously it distorted the indicators in favour of the consumer.

An error of 27% was found on one of the counters. Photo: Kosatka.Media

However, if it seems to someone that the meter winds up a lot of gas, an extraordinary verification can be initiated. If the meter does not pass the test, the regional gas pays for it, and if it passes, the consumer pays (about UAH 270, but for exact information on how much it costs to calibrate the gas meter, you should contact your regional gas).

And if the consumer does not trust the regional gas laboratory, he can turn to any other independent laboratory and take measurements there.

Which meter is better: your own or from the regional gas?

Following the approved rules, the verification of meters with an accuracy class of 1.5 (such are used by the population) should occur once every 8 years. Each device must undergo two checks during its service, and it must be written off for the third.

Removal of the meter, verification, installation, as well as the purchase of a meter in case of replacement is done at the expense of the regional gas - the money for this has already been included in the distribution tariff.

However, no one will prohibit the consumer from installing a meter purchased independently (if it passes all the checks). The main requirement is that it can be repaired or replaced in Ukraine. The fact is that the manufacturing plant corresponds to the reliability of the metering devices (as well as repair and replacement). And if a consumer has purchased an imported meter, and there is no representative office of its manufacturer in Ukraine, then problems may arise. Regional gas companies will install and register such a meter, but the service will be at the expense of the consumer.

By the way, attempts to simplify the maintenance of meters is one of the reasons why regional gas companies strive to reduce the number of their names to 3-4 types and ask consumers to install devices from those manufacturers whose representatives are in Ukraine.

Read also: COLLECTORS DEMAND DEBT FOR GAS: HOW TO PROTECT YOURSELF

About 10% of meters require verification every year. In practice, these are hundreds of thousands of devices throughout Ukraine. And although there are laboratories where this is done in all regional gas companies, they cannot perform the required number of checks on their own.

For example, the capacity of the Kharkivgaz laboratory is 40-45 thousand checks per year, while 100-120 thousand meters need to be verified to eliminate all "debt". Because of this, the company has consumers whose meters have not been verified at 2-3 intervals - that is, 16 or even more years. The laboratory could work in 3-4 shifts, but under such conditions, its equipment would quickly fail.

Last year, a metrological centre was opened in Kharkiv - a kind of "laboratory at maximum speed", which is capable of verifying up to 250 thousand meters per year. This is since all stages of verification are automated and take place almost without the participation of people. Kosatka.Media visited this enterprise.

Meters are brought to the metrological centre from district sites in containers. There is a QR code sticker on the front of each meter. With its help, you can track the entire path of the device (like a parcel in the mail) and all metrological characteristics - who put the seal, whether magnetization was found, with what error the meter entered the metrological centre, and which one left.

In the warehouse, the counters are left to stand at room temperature so that the measurement conditions correspond to the procedure. Photo: Kosatka.Media

First of all, an employee of the metrological centre checks whether the seal is intact, and if everything is in order, they drill it on a special machine. 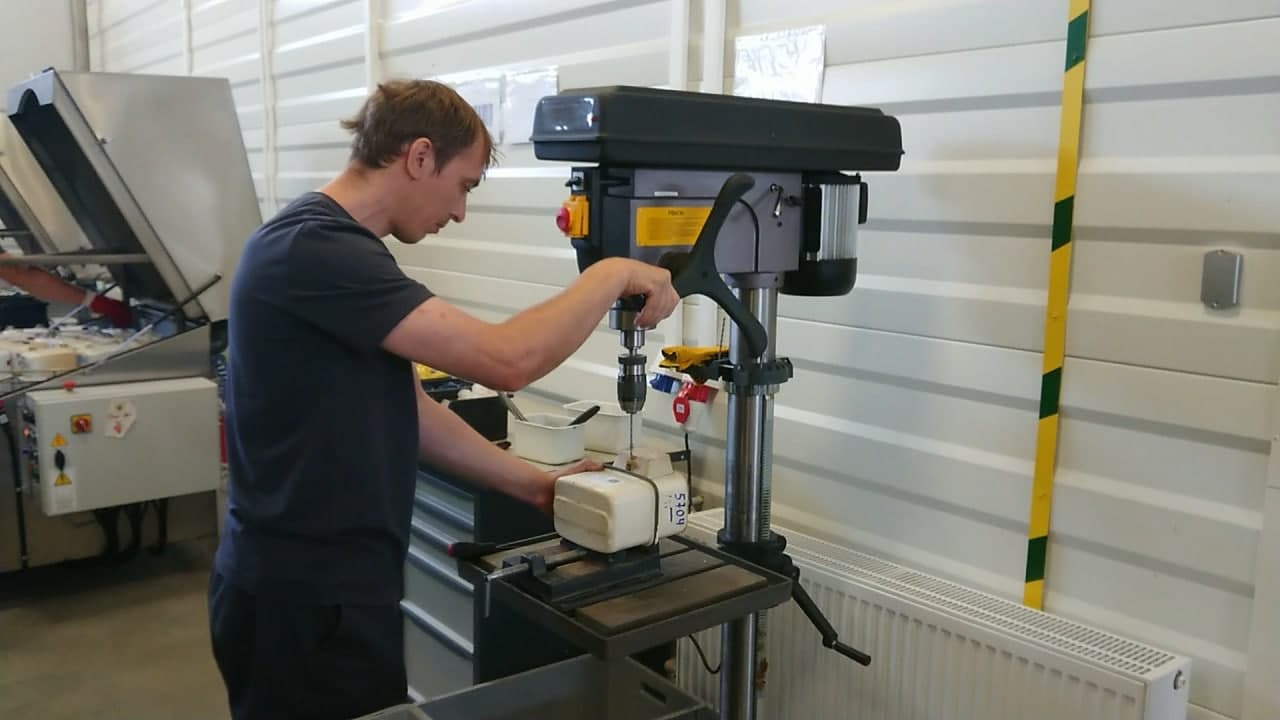 The first stage is to check the integrity of the seal and unseal the meter. Photo: Kosatka.Media

Further - control on the magnetization sensor. So they check if consumers have tried to influence the indicators with the help of a strong magnet. If the sensor shows more than 300 milli-Tesla, the counter is designated as magnetized, and information about this is entered into the base. Its owner is likely to face a large fine. 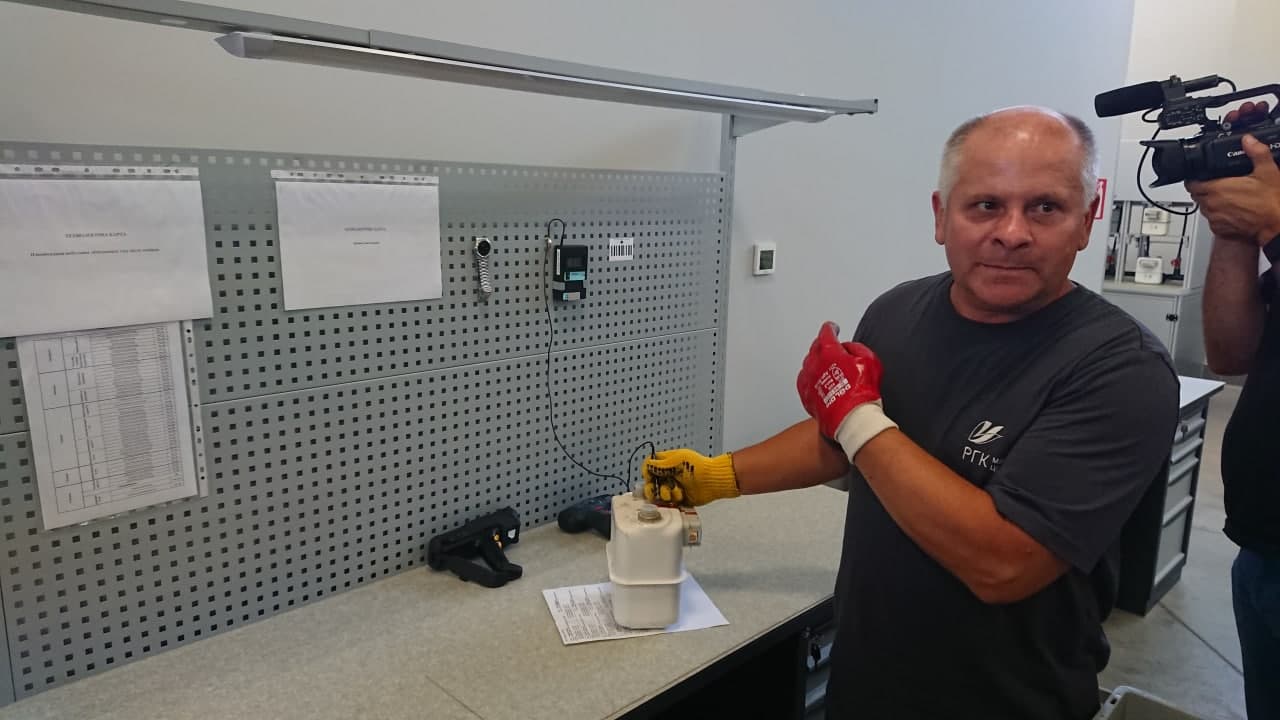 The sensor is used to check all places on the meter body, where it is possible to influence its operation with the help of a magnet. Photo: Kosatka.Media

“We were arranging the experience. We put a neodymium magnet on the counter and left it on for several days. After that, the tester showed more than 300 magnetization units. Of course, if someone's child, while playing, puts a small magnet on the body, then there will be no trace of it. We need a purposeful desire to influence the operation of the meter, ”explained the locksmith Vadim, who controls the magnetization of the meters.

By the state of the meter bodies, one can understand where they stood. Covered with rusty stains - on the street, and those on which a thick layer of grease sparkles - in the room by the stove. They are washed from dirt in a special chamber of the metrological centre. And then they blow out the debris that could have accumulated in the membrane. 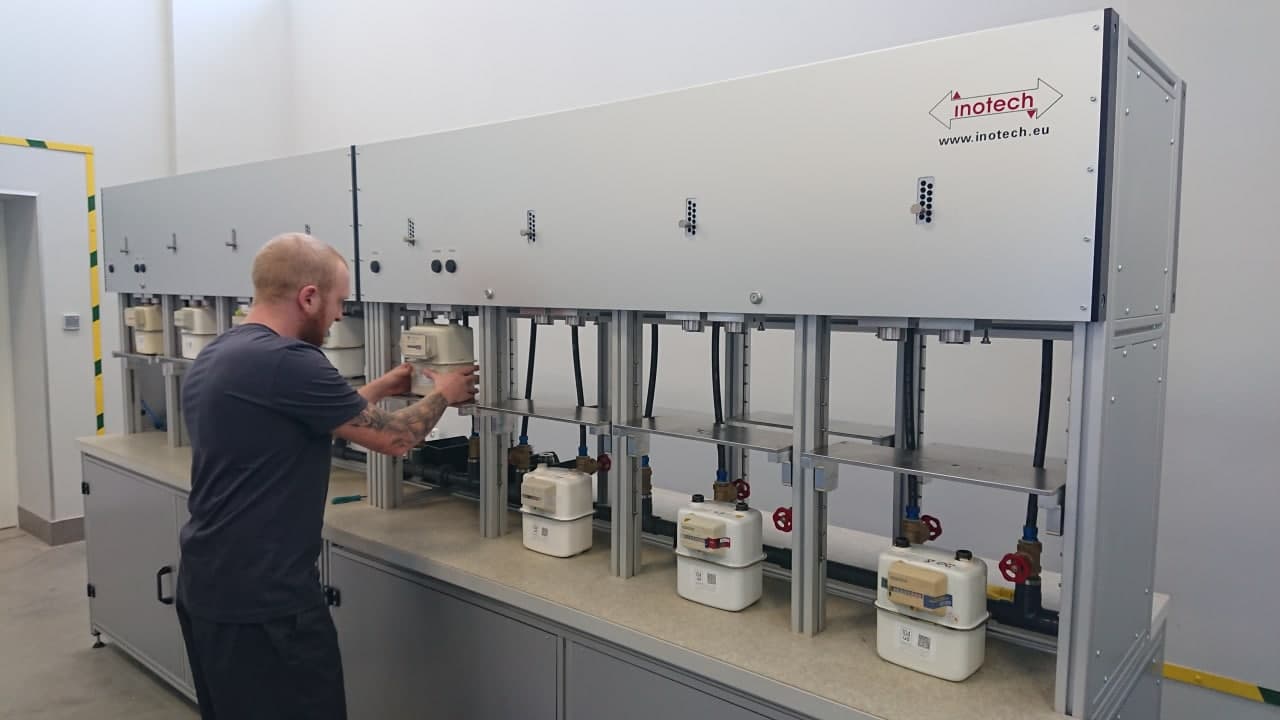 On a separate stand, the meters are "vacuumed". Photo: Kosatka.Media

The most important part is verification on an automated stand. The metrological centre has 5 units of the German manufacturer Inotech. Three allow you to simultaneously check 12 counters and two - 18 counters. That is, 72 counters can be verified in one cycle, and about 500 in a day.

These installations allow verification both by the old (visual) method and by the modern ones, using high and low-frequency sensors. This allows you to speed up the process since the human factor is excluded. At the same time, there is no difference in what year the meter was manufactured, since the methodology for old and new is the same. 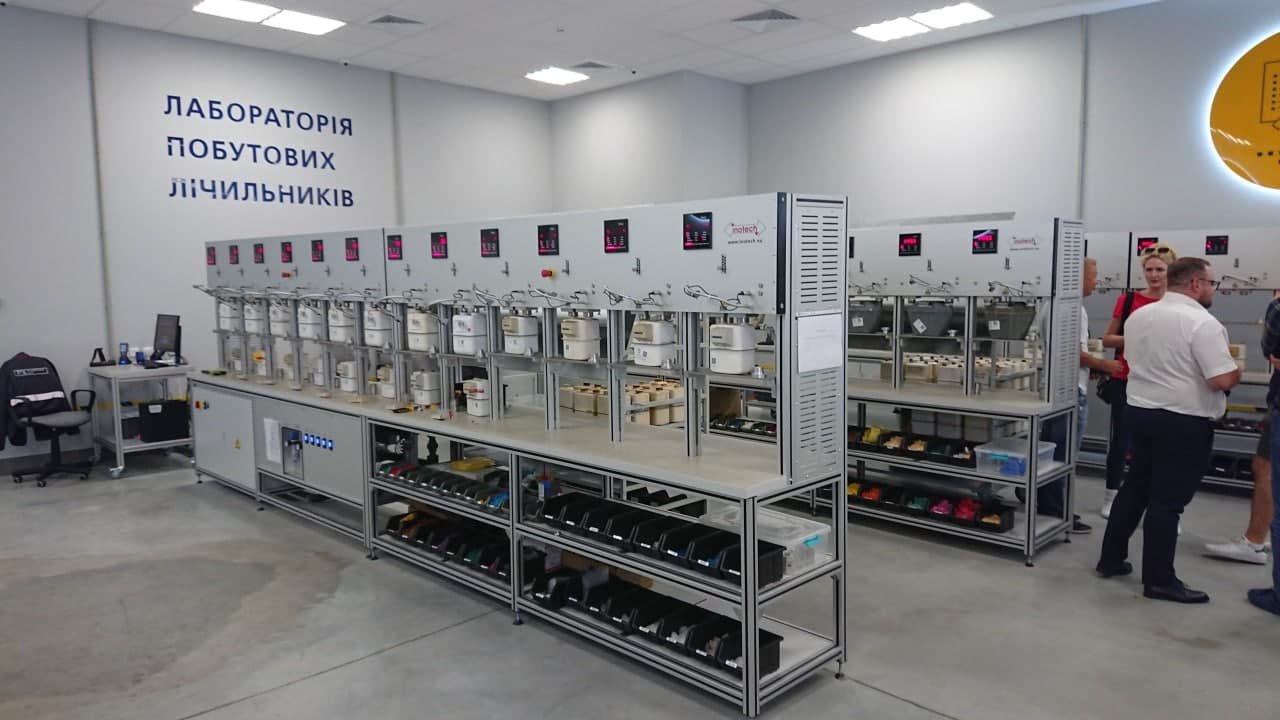 The verification process is done almost without the participation of people. Photo: Kosatka.Media

“We connect the meter, pump air through it and check what kind of error it gives. After that, we determine how to adjust so that the error limits fit into the guidelines. Depending on this, we select a pair of adjusting wheels, which changes the error. Then we check the functionality again. If the counter still works incorrectly, then we reject it. If all is well, then this meter goes to the consumer, ”said Mykhaylo Melnyk, engineer of the metrological centre.

According to the employees of the metrological centre, on average, about 40% of meters do not pass verification.

“That's a lot, but it all depends on the sample. If fresh counters are checked, then they have a lower percentage. And if the old ones, then the percentage is higher. This year we took the direction - we take in practice meters that were not verified for more than one interval or other types of meters that were produced in the early 2000s and did not pass verification," Dmytro Muzyka, chief metrologist of Kharkivgaz JSC explained.

Is there a benefit to consumers from checking a meter at a metrology centre?

From a technical point of view, it makes no difference for consumers where the verification will take place - manually in a laboratory or automated in a metrological centre. However, in the latter, everything happens much faster and in one operation.

“Previously, gas workers removed the meter, put an adapter tube instead of it, and if the meter passed the verification, two months later they came and installed it back. During this period, the consumer paid for gas according to his average consumption indicators for the previous 3-4 months. If the meter did not pass the verification, the consumer “sat on the phone” for another 3-4 months. Now, instead of the removed one, they install a counter from the exchange fund and the person uses it further. All this takes 20 minutes. If the meter has passed the verification, it is transferred to another subscriber, and if not, it is disposed of. The difference for subscribers is in speed, ”explained Dmitry Muzyka.

Read also: Gas workers are preparing to mix gas with hydrogen: what does it mean to consumers and will our pipes cope with it?