Russia is about to complete the construction of the Nord Stream 2 gas pipeline. This issue has been the top one in the Ukrainian media for several weeks. However, for ordinary citizens, it remains unclear why so much attention is paid to it. Kosatka.Media answers 6 main questions on Nord Stream 2.

Nord Stream 2 is a gas pipeline that Russia is building under the Baltic Sea to transport its gas to Europe. The construction of the gas pipeline is managed by Nord Stream 2 AG, whose shareholder is the Russian Gazprom, and the investors are five companies from France, Austria, Great Britain and Germany. As of the end of July, it is 99% complete.

The project is called the Kremlin's gas weapon because it increases Europe's dependence on Russian gas and gives Russia additional opportunities to dictate terms (for example, by limiting gas supplies or raising gas prices).

The Ukrainian gas transmission system (GTS) can serve as an alternative because it can also transport gas to Europe from Central Asia (Turkmenistan, Uzbekistan, Kazakhstan). However, the Russian Federation is blocking such transit.

The most powerful advocate of the project is Germany, the most powerful economy in Europe. With the launch of the gas pipeline, it can become Europe's largest hub (platform) for the sale of natural gas and make money on it. In addition to the fact that Germany will receive cheap gas, it will take transit income from Poland, Slovakia and Ukraine. The Germans call Nord Stream 2 an exclusively commercial project.

The construction is opposed by Ukraine, Poland and the Baltic countries. They call the pipeline a purely political project and see it as a threat to their energy, political and military security from Russia.

Russia planned to build Nord Stream 2 no later than the 4th quarter of 2019 when the transit contract between Gazprom and Ukraine came to an end. The Russian side did not expect to continue it. In December, when the readiness was almost 94%, the United States blocked the work with sanctions. During 2020, there was practically no construction. At this time, optimistic sentiments reigned in Ukrainian society.

Also, almost no one had any doubts that construction would be stopped, and when Joseph Biden became the new president of the United States, he has repeatedly declared his favour to Ukraine and called the pipeline a "bad deal" for Europe.

But soon the President of the United States decided to restore relations with Europe, which had suffered from the foreign policy of his predecessor Donald Trump, and unexpectedly announced to everyone: since the gas pipeline is almost completed, the introduction of new sanctions would be harmful to the US relations with Europe.

Historically, Ukraine has been one of the main transit countries for Russian gas to Europe. The maximum historical volume of Russian gas transit through the territory of Ukraine was recorded in 1998 – 141.1 billion m3. 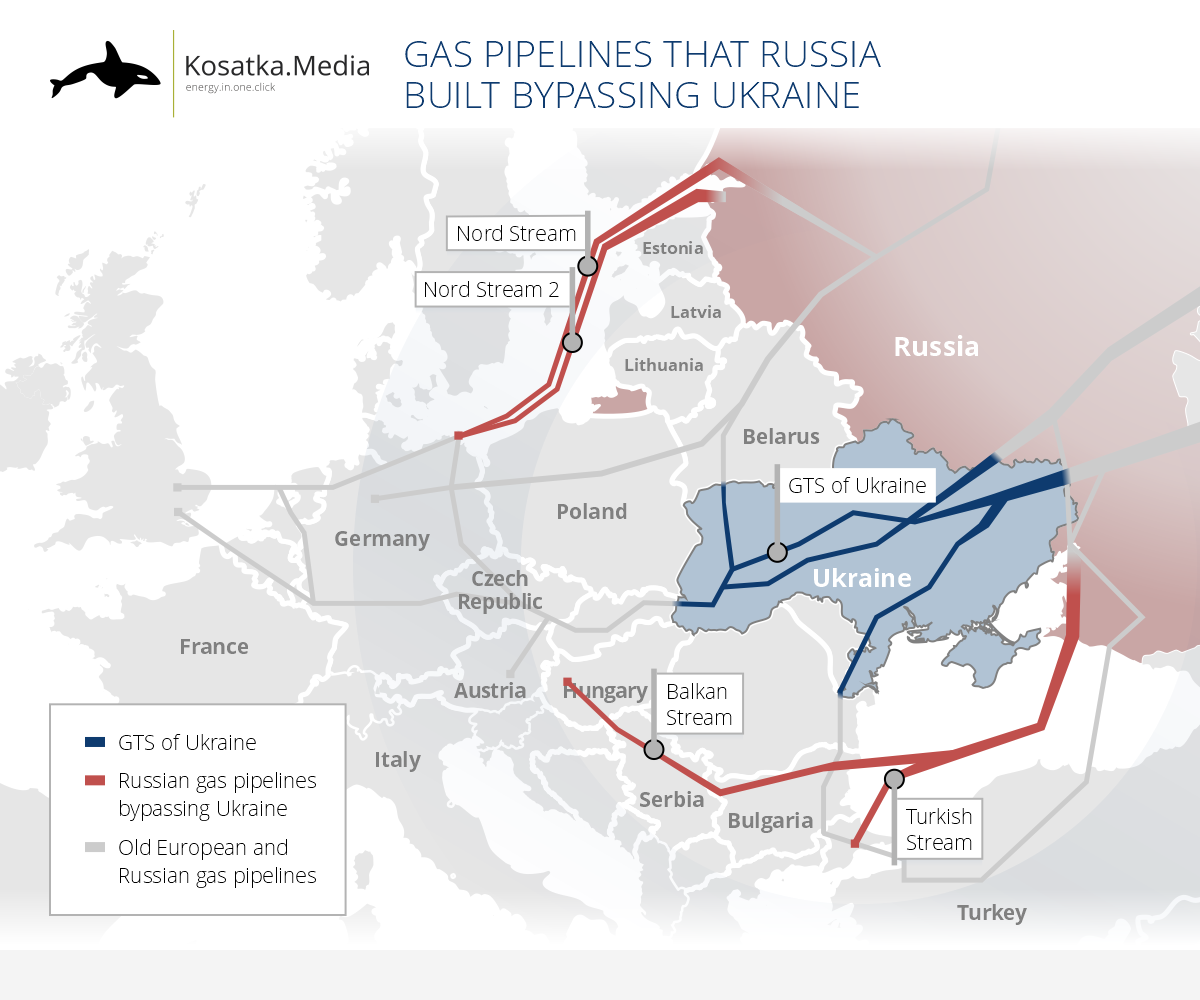 At the end of 2020, transit through Ukraine amounted to 55.8 billion cubic meters, while the contract with Gazprom was supposed to be 65 billion cubic meters. Despite the “take or pay” condition, Russia is ready to pay money, but not load the Ukrainian pipe.

In 2021-2024, according to the terms of the agreement, the transit volume will be decreased to 40 billion m3/year. This is a historical minimum. 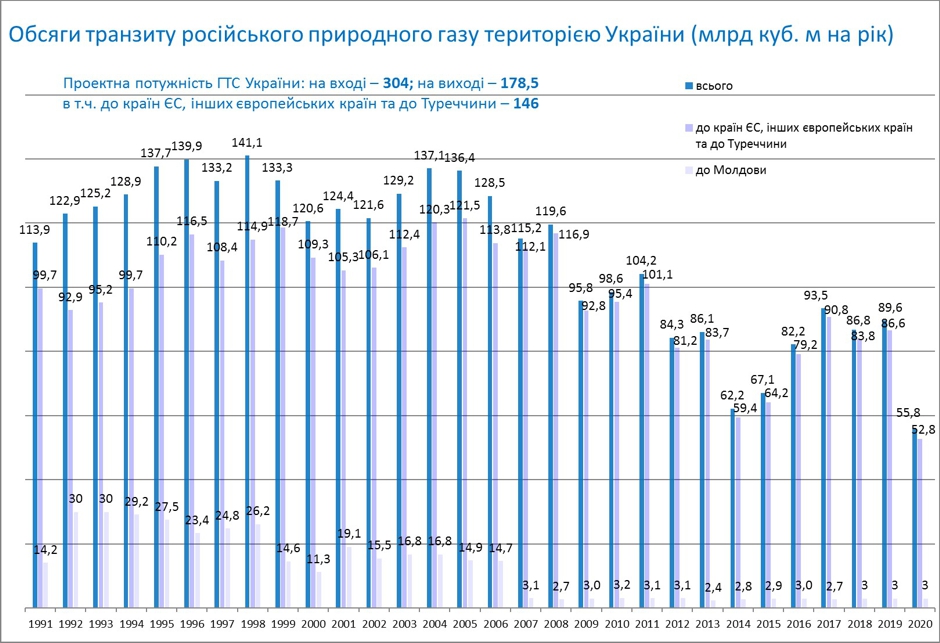 The capacity of Nord Stream 2 after launch will be 55 billion m3/year. This means that Russia can refuse the services of Ukraine altogether.

The Kremlin justifies the need to exclude Ukraine from its supply routes with the myth of Ukraine's "unreliability" as a transit country, which can allegedly stop pumping gas at any time. But this does not correspond to reality: for all the time there has not been a single interruption in the supply of gas to Europe due to the fault of Ukraine. And in terms of 1 km of pipe, the average accident rate of the Ukrainian gas transportation system is 7 times lower than that of Gazprom's pipes in Russia.

The Kremlin, in response to a question about the future of transit after 2024, nods to Europe - they say, everything depends on the demand for gas there. In Ukraine, however, they believe that if the Nord Stream 2 is completed, then after the end of the contract, Russia will 100% refuse transit.

There is an agreement between Biden and German Chancellor Angela Merkel that SP-2 should be completed. For this, Germany must influence Russia so that it concludes a new contract with Ukraine for at least 10 years. In the event of armed aggression by Russia, or if Russia uses gas as a weapon, Germany will have to urge the European Union to impose sanctions on Russian gas supplies. Ukraine and Russia were not involved in these negotiations.

Ukraine makes money on the transit of Russian gas. The terms of the contract with Gazprom provide for the receipt of at least $7.2 billion over 5 years. If Nord Stream 2 is completed and the contract is not extended, Ukraine's direct losses will amount to about $1.5 billion annually. But there will also be indirect ones. And they are even more than straight lines.

According to Serhii Makohon, the head of the Ukrainian GTS Operator, with the launch of Nord Stream 2, gas prices will automatically rise in Ukraine (by about $50/thousand m3, or + UAH 1.3/m3 of gas), since its transportation from Germany will be more expensive than buying at the western border. This will cause an additional $2-3 billion in losses for the economy.

“A significant part is accounted for by indirect losses. Gas will rise in price by about $50/thous. m3, as the cost of transportation to Ukraine, will increase. If gas rises in price, then all our exports, for example, fertilizers, price rise. Also, gas will rise in price for the population, respectively, more funds will be needed for subsidies,” Makohon said.

Direct and indirect losses of Ukraine from the launch of Nord Stream 2, the head of GTSOU estimated at $5-6 billion per year.

Also, stopping the transit of Russian gas unites Russia's hands for full-scale armed aggression against Ukraine (for example, under the pretext of the need to provide water to the annexed Crimea). It is believed that now the "pipe" is holding her back from this.

Both Ukrainian and international experts say that the launch of Nord Stream 2 by itself does not mean a complete disaster for Ukraine. At least until the end of 2024, Ukraine will receive income from transit under the current contract.

Serhii Makohon says that the European Commission should have a political reaction to the agreement between the administrations of Angela Merkel and Joe Biden on the completion of the gas pipeline and the future of the Ukrainian GTS (this is an analogue of the Ukrainian Cabinet of Ministers but within the framework of the European Union).

There is also hope that the gas pipeline may "stumble" at the certification stage (confirmation that it is reliable and safe).

“Completion of the construction of Nord Stream 2 requires certification for commissioning. This procedure is being carried out by the German regulator, but the European Commission will scrutinize it. And, possibly, the European Commission will appeal against this certification. If it does not comply with the norms of the Third Energy Package. Yes, the situation is difficult, but I would not say that everything has already been lost,” Makohon said in an interview with Ukrainian Forbes.

Also, European courts may prohibit Gazprom from using Nord Stream 2 by 100%, demanding that other participants be allowed to pump gas.

Russian oil and gas analyst Mykhaylo Krutikhin says that part of the transit through Ukraine may continue after 2024. For example, it is profitable for Italy to receive gas through Ukraine, Slovakia and Austria, and therefore it is in favour of maintaining this route. However, no one knows what will actually happen from 2025.

At the same time, he believes that the guarantees that the US and Germany are going to give Ukraine are worthless.

“The EU countries, as you know, are far from being in solidarity with each other when it comes to energy exports from Russia. In this sense, the European Union is split. There are countries that are critically dependent on Russian gas imports and they will never vote on boycott sanctions. So this measure is not realistic at all,” Krutikhin said.

The Ukrainian GTS pumps both transit gas and the one that is consumed by the population and industry. It will be able to work without transit. However, under the "zero scenario" there will be excess capacities, which will be very unprofitable to maintain.

Without optimizing the GTS and reducing operating costs, the tariff for the services of the GTS Operator of Ukraine may grow 2-4 times. To prevent such an increase, a very significant percentage of gas pipelines and compressor stations will have to be decommissioned - more than 50%. According to Makohon, this could be liquidation, conservation or repurposing. This process will be irreversible.