Ukraine has become much more dependent on oil and petroleum products imports over the past 15 years. Instead of six large oil refineries, only one is operating today.

In 2020, national producers provided only 49% of the volumes of gasoline consumed, 15% of diesel fuel and 20% of LPG. An additional risk is that Russia and Belarus are among the key suppliers.

What does the Ukrainian fuel production market look like now, what is wrong with import dependence and how to get rid of it – experts told during the presentation ‘How can Ukraine remove the fuel loop?’

In what condition is Ukrainian oil refining now?

According to the analytical report of Andrian Prokip, an expert of the Energy Program of the Ukrainian Institute of the Future, the production of light oil products of Euro-5 quality in Ukraine is carried out by the Kremenchuk Oil Refinery (Ukrtatnafta, Poltava Region), Shebelynka Gas Processing Plant (Ukrgasvydobuvannya, Kharkiv Region), as well as mini-refineries: up to 15 factories of various capacities.

Foreign suppliers account for about 70% of the consumption of petroleum products and this import annually, depending on the conjuncture, is spent $3-6 billion.

The expert calls the diesel fuel market one of the most vulnerable. During 2020, the balance of diesel fuel amounted to 7.37 million tons, which exceeds the last year's figure by 5.4% (375.6 thousand tons).

The main supplier of the resource during the year was the Russian Federation - 42.2% of imports - 2.6 million tons, most of which were produced by Rosneft, a significant amount of which was imported to Ukraine by rail - 1.11 million tons. The rest of the producer's volume was pumped oil product pipeline - 629.1 thousand tons.

The main consumer of diesel fuel in Ukraine is industry (agricultural, chemical enterprises, carriers, etc.). Commercial use in 2020 amounted to 5.6 Mt (+ 1.4% by 2019), or 76% of the total market. The agricultural sector accounts for about 2.5-3.0 million tons/year. consumption, among carriers the largest consumer of diesel fuel is Ukrzaliznytsya - about 400 thousand tons.

On the gasoline market, the Republic of Belarus was the main supplier of the resource. In total, two Belarusian refineries increased exports to Ukraine by 22.8% (or 158.4 thousand tons) compared to 2019, to 851.9 thousand tons.

Gasoline supplies from the Mozyr refinery increased by 32.2% (or 200.6 thousand tons) compared to last year and amounted to 823.0 thousand tons. 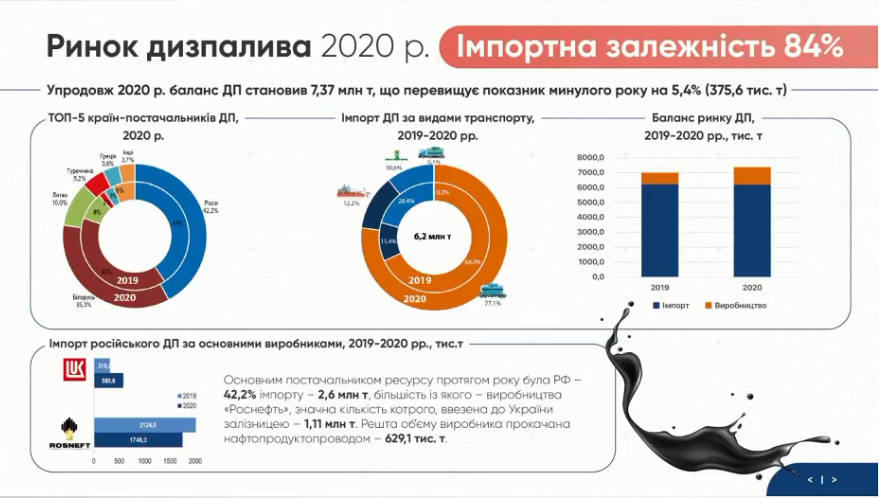 The volume of A-92 receipts from the Novopolotsk Refinery (Naftan) amounted to 28.9 thousand tons. At the end of the year, the increase in Novopolotsk imports compared to the previous period is 32.1% (5.2 thousand tons).

Direct deliveries by land transport from Russia increased by 21.2% to 715.4 thousand tons (+ 3%). The share of the Russian Federation in imports increased from 43.2% to 44.3%. First of all, this is due to an increase in receipts from the Perm refinery "Lukoil" - from 172.2 thousand tons to 207.9 thousand tons. The largest supplier remains Rosneft, which reduced the volume of autogas exports in Ukraine by 6.8%, 443.1 thousand tons.

The fuel loop and its main threats

The situation is such that now it is Russia and Belarus that provide a large or significant part of the consumption of petroleum products in Ukraine: 65% of diesel fuel, 40% of gasoline and 49% of LP. The further growth of this dependence threatens energy and national security in general.

“In the event of a political decision on the part of Russia and Belarus, there will be a significant shortage of oil products in Ukraine, which will lead to a jump in prices and disruptions in the work of industrial consumers, including the defence sector, agricultural enterprises, Ukrzaliznytsia,” Andrian Prokip explained.

NefteRynok columnist Volodymyr Dolnik noted that in the situation with fuel, Ukraine found itself in the fuel loop, and not on the "needle", as it was in the past with the gas situation.

“Ukrainians grow grain, smelt metal, sell it all for export, and receive dollar earnings. And then we send it to Russia, Belarus and other countries to get fuel and go to the next round: grow wheat, smelt metal. It's such a loop and a damned circle,” he explained.

Dolnik also stressed that in the conditions of hostilities that continue in Ukraine, the problem of lack of fuel for military equipment can be a very risky factor. 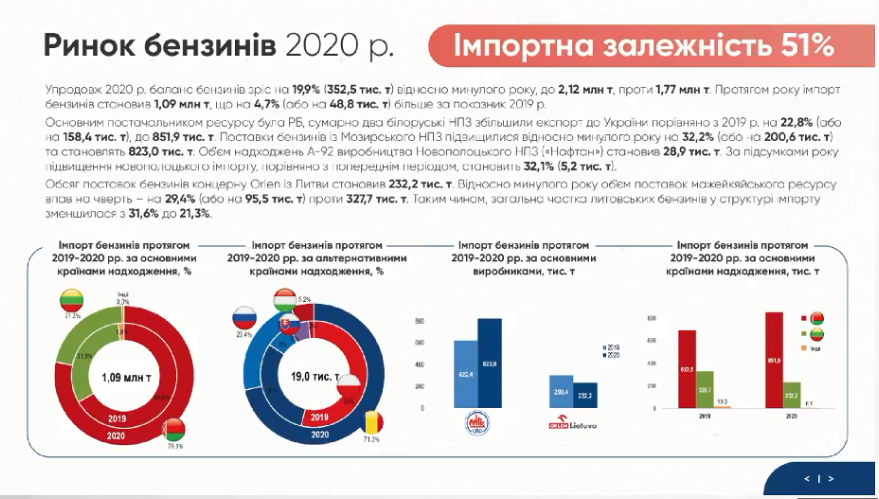 What solutions to the problem do experts see?

The only way out is to reduce dependence on supplies from the Russian Federation and the Republic of Belarus and diversify imports. To do this, it is necessary to increase the volume of supplies from other countries: by sea and from the EU.

It also requires the creation of insurance reserves of oil and oil products, following the practice of the Energy Community, experts say. This should be the volume that covers the 90-day requirement.

In addition, Ukraine should work to increase the volume of its own oil refining and reduce the need for imports.

What are the chances and prospects of increasing Ukrainian oil refining

An increase in the national production of petroleum products can be achieved by modernizing one of the existing refineries in Ukraine, after gaining control over it from the state (leasing or buying out a majority stake), Prokip said.

“If the state gains control (long-term lease or buyout) over one of the refineries that are undergoing modernization - Lysychansk, Nadvornyansky or Drohobych, and its further modernization, it can increase the production of oil products, which means less dependence on supplies from Russia and Belarus, and also - the creation of prerequisites for new jobs and economic growth," the expert explained.

But any of the above enterprises has its own advantages and risks.

The Lysychansk Refinery has a risky factor of proximity to the demarcation line, and therefore risk in the event of intensified hostilities.

The Nadvornyansky Oil Refinery has less attractive logistics conditions for its location than the Drohobych one.

The most attractive from the point of view of the simplicity of organizing logistics and placement, according to experts, is the Drohobych Oil Refinery. 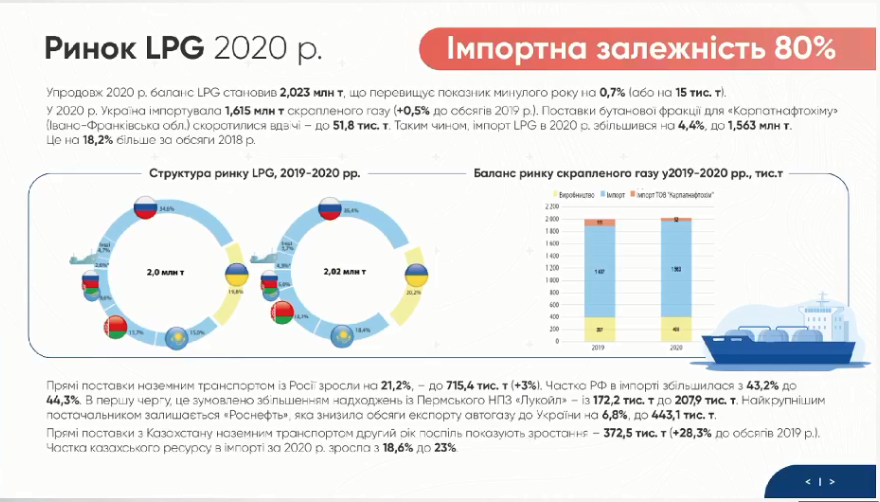 Among its advantages, which experts point out:

1. Diversification of feedstock supply channels: the possibility of supplying oil to refineries:

- Urals on the Druzhba oil pipeline;

2. The Drohobych Refinery borders on the line department of Ukrtransnafta: an available tank farm for storing Ukrainian and imported oil, oil heating capacity. There is a well-developed railway infrastructure.

3. Availability of a connection by an oil product pipeline with the Karpatneftekhim enterprise.

4. The location of the refinery within the 200-mile zone of NATO's strategic interests.

“Unlike the Nadvirnyansky Oil Refinery, Drohobych has twice the capacity of the connected oil pipelines, its own railway depot and a section for the preparation and steaming of tank cars, installed bitumen plants, and also borders on the capacities of Ukrtransnafta, which gives it significant logistical advantages," Prokip said.

But the Drohobych Oil Refinery also has its "buts", Volodumur Dolnik said.

“We must be prepared that it will not be very fast. Even though technologies have gone ahead since 2008 when plans for the modernization of the Drohobych refinery were being developed. According to the commercial director of Ukrgazvydobuvannya, Serhii Fedorenko, the design and procurement procedures are 1.5 years. At the Kremenchug refinery it was 7-8 years. Therefore, for the Drohobych oil refinery, if we start doing it now, it will be 4 years and $2 billion,” he explained.

In the case of modernization and full utilization of the capacities of the Drohobych refinery, several positive effects are possible, experts noted. In particular, the reduction of import dependence on diesel fuel from 84% to 70%; gasoline - from 51.5% to 0%, LPG - from 80% to 70%.

There are advantages for the economy as a whole, experts said. In general, a reduction in imports of petroleum products can save $ 1.3-2.5 billion a year (depending on the price environment).

Also, the new refining capacity will create up to 1200 new jobs and will preserve the scientific and technical potential of oil refining in Western Ukraine.

In addition, the substitution of imports by national production will create an additional GDP of$ 8.7-16.9 billion over 5 years and will have a positive effect on investments in Ukraine.

Infographic: Ukrainian Institute of the Future