The state-owned enterprise Energoatom plans to receive 67% more revenue in 2021 than this year. In absolute terms, this is UAH 31 billion more. This will happen if the Cabinet of Ministers changes the model of public service obligations (PSO) to a financial one.

In its current form, PSO is a temporary mechanism, which expires on December 31, 2020. It is believed that after this, producers will be able to enter the market, earn and save money for their development. However, this might happen under perfect conditions. Nobody really knows how successful state-owned companies will be in trading.

Kosatka.Media explains what PSO is, how it works in Ukraine, and why changing its model, which Energoatom and foreign experts are striving for, will inevitably increase prices for the population.

The essence of this mechanism is that the state imposes public service obligations on market participants (in this case, Energoatom and Ukrhydroenergo), namely, the obligation to compensate the difference between the social tariff for the population and the market cost of electricity at its own expense.

What does this mean in practice? Now Ukrainian households buy electricity at tariffs that have not changed since March 1, 2017. If up to 100 kWh is consumed per month, the tariff is 90 kopecks/kWh; all that is more than this volume is paid at the rate of UAH 1.68/kWh. For comparison, the industry currently pays from UAH 2.5 to UAH 4 per kilowatt-hour.

The benefit for the population in the form of stable and relatively low prices for electricity is not free for its producers. Energoatom (manages nuclear power plants) and Ukrhydroenergo (manages hydroelectric power plants) are obliged to sell 50% and 30% of their electricity to Guaranteed Buyer at 1 kopeck/kWh. This is lower than the cost of a kilowatt-hour, which for a nuclear power plant, for example, is about 52 kopecks. Therefore, producers do not receive a significant part of the funds that they could earn in the market.

Previously Acting Minister of Energy of Ukraine Yurii Boyko said that it would not be possible to resolve the issue of paying off debts that had formed before the introduction of the new model of the energy market this year.

The real difficulties with PSO begin when it comes to money.

Commodity PSO assumes that the end consumer deals only with the product (electricity). It is sold immediately at low fixed prices, and all calculations and compensations are made at the “producer - state” level. 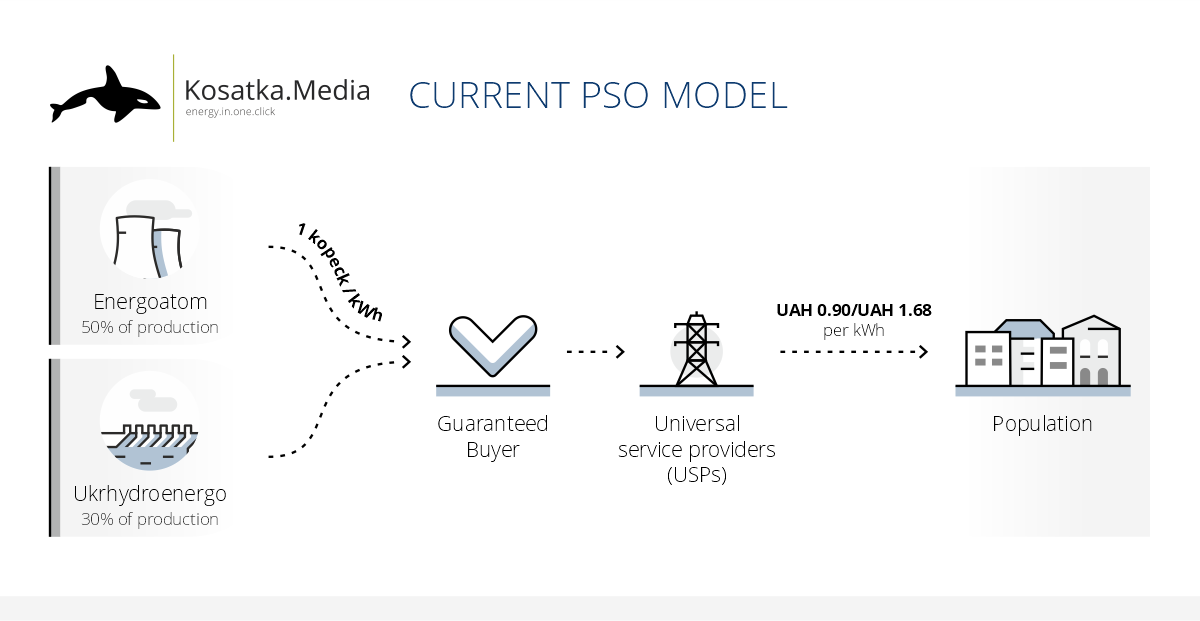 In the financial model case, the household buys electricity from the supplier at full price and then receives compensation from a specially created Endowment Fund. Contributions from all market participants replenish the fund. This is very similar to monetizing utility subsidies. 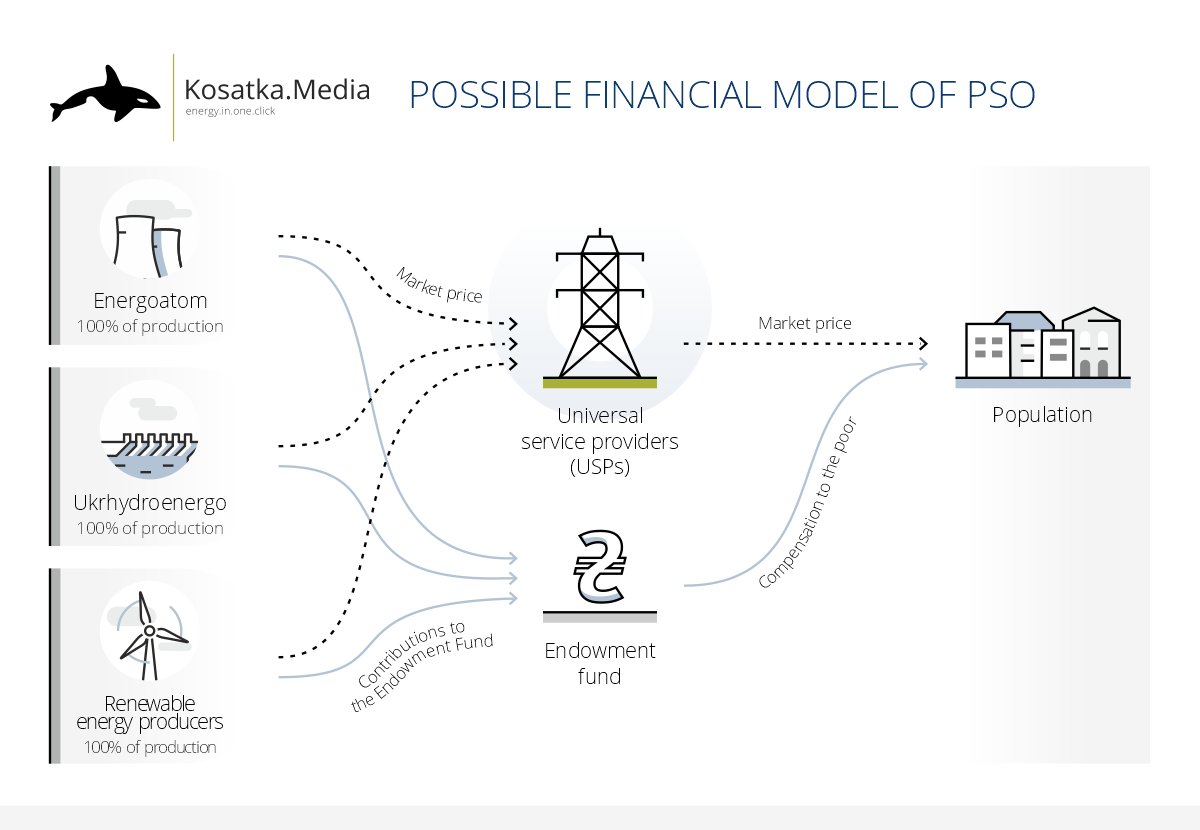 The commodity model operates in Ukraine, but after several amendments introduced by the Cabinet of Ministers on August 5, 2020, it is called transitional between commodity and financial ones.

What happened? The government obliged Energoatom to sell 50% of its electricity to Guaranteed Buyer at 1 kopeck/kWh (before that, the state bought 80% of its production at 56 kopecks/kWh). In return, the nuclear scientists were allowed to sell 40% of the products on the market and another 10% on the market a day ahead. In other words, on the one hand, they partially opened access to the market for a generation, and on the other hand, they were obliged to give half of the products at the lowest price.

The company was expected to benefit from this. However, instead of a financial recovery, Energoatom received another portion of losses – about UAH 5 billion.

“I was categorically against such an introduction – to release electricity for the population at 1 kopeck. We were promised that Guaranteed Buyer, which owed us UAH 9 billion, would return our debts by selling this electricity. There is no other way. Unfortunately, this has not happened. Guaranteed Buyer does indeed trade, but it does so to pay off debts, not to Energoatom, but “green” producers. 9 billion were not returned to us, and we got a loss,” commented DeputyChairman of the Atomprofspilka Oleksii Lych.

The Energy Community (an international organization that works to unite the energy markets of the EU and other countries) insists on the implementation of the financial model in Ukraine.

The transition to the financial model may happen in 2021. According to Deputy Energy Minister Olha Buslavets, it will be gradually introduced in Ukraine.

“This will help the state power generating enterprises sell all their electricity on the market and get a competitive price for it,” Buslavets said.

However, the introduction of a financial model requires the Verkhovna Rada to amend the Tax Code. Without them, the transition to a new model is impossible.

Recall that the Ministry of Energy of Ukraine has set a goal for 2021 to balance the electricity market. There is a program for this.

What does Energoatom expect, and is it realistic?

Will the transition to a financial model take place in 2021 is one of the main intrigues on the electricity market.

Energoatom counts on this so much that it formed its financial plan for 2021, which it submitted to the Ministry of Energy based on the financial PSO model. The company believes that it will be able to sell 100% of its products on market conditions, as a result of which its revenues will increase compared to 2020 by 67% (+UAH 31.3 billion), and contributions to the budgets of all levels – by 71% (+UAH 9,8 billion).

According to Yurii Kubrushko, Managing Partner of IMEPOWER Group of Companies, financial PSO is beneficial for Energoatom. The company gains full control over the sale of the entire volume of electricity.

At the same time, Olha Kosharna, an expert on nuclear energy issues, notes that the financial plan submitted by Energoatom to the Ministry of Finance can only be prepared based on current regulatory legal acts. And there are no such as of the end of November.

“The financial PSO project is not approved by the Cabinet of Ministers of Ukraine. Thus, Energoatom has prepared a financial plan based on its fantasies, and it will be returned to Energoatom. The financial PSO project is being discussed, but so far, the calculations show that Energoatom's entire revenue will not be enough for everything and PSO. The only way out is to cancel PSO for the population,” Kosharna said in a comment for Kosatka.Media.

Financial PSO = growth of tariffs for the population

Acting Energy Minister Yurii Boyko expressed the same opinion that Energoatom will not be able to pay subsidies to the population independently during a briefing on Thursday, November 26.

He recalled that financial PSO involves the work of all market participants on a competitive basis. In other words, Energoatom and Ukrhydroenergo sell the entire volume of their electricity on the day-ahead market, both on the intraday market and the market of bilateral contracts. Unsold volumes are sent to the balancing market.

“But suppliers, including for the population, buy electricity at the market price, selling it to the population at a loss. If the market price is about UAH 1.40/kWh, we add the transmission cost from January 1 to UAH 1.37/kWh; we get the cost for the final consumer (household) of UAH 2.77/kWh. And we sell to people for about UAH 1.03/kWh. The difference (loss) is UAH 1.73. Multiply by the population. I ask the question – who can find UAH 65-70 billion and give them to suppliers to balance their activities within the financial PSO project? And this is not the only problem of the transition to a financial PSO,” Boyko explained.

According to Boyko, even if Energoatom sold all of its electricity at the best prices, its revenue would not be enough to compensate suppliers for unprofitable activities from supplying it to the population.

"Tellingly, the conclusion does not change from the price on the DAM (the higher price on the DAM allows Energoatom to earn more, but at the same time the amount of compensation by universal service providers increases – they will also buy more expensively)," Boyko wrote on November 3 in a comment under the post of the Deputy Head of the Energy Efficiency Department of Naftogaz on Facebook.

At the same time, at the briefing, he noted that he considers the transition to the financial PSO to be unambiguously the right step since it will allow all manufacturers to work in equal conditions.

“But it is necessary to significantly reduce the volume of cross-subsidizing [in other words, to raise tariffs for the population – ed.] because then no one will come up with any miracle. You can't fool math. Subject to a gradual reduction in cross-subsidization, the next step would be to switch to a financial PSO project. And then it will work the way it should be,” summed up Boyko.

Recall that the Ministry of Energy of Ukraine will increase the electricity tariff for the population throughout 2021.