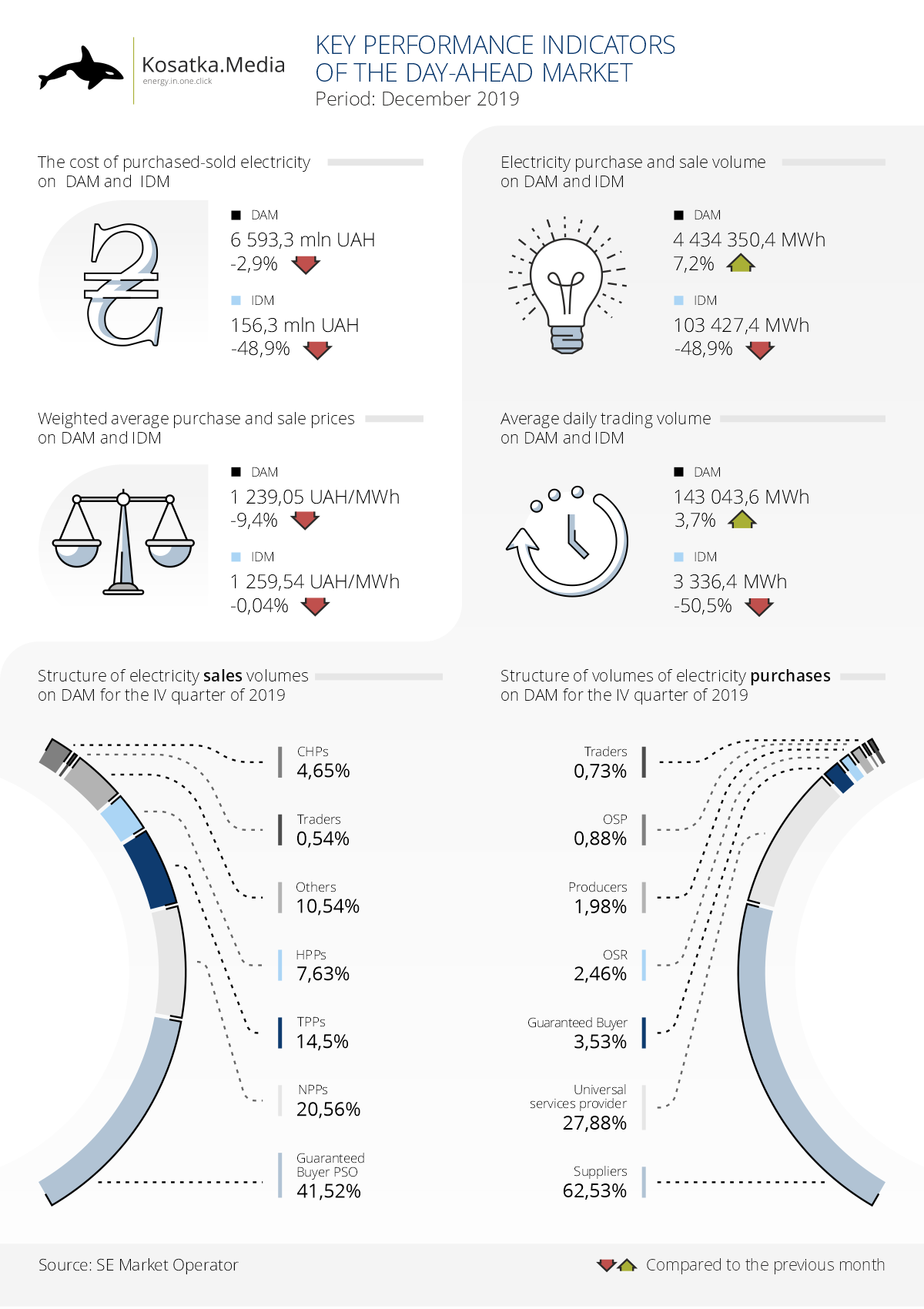 Average daily sales on DAM increased in December by 3.7%

The average daily purchase and sale of electricity on the day-ahead market (DAM) increased in December 2019 by 3.7% compared to the previous month and amounted to 143 GWh, according to the state Market Operator.

On the other hand, due to the larger number of days in December compared to November, the total volume of purchase and sale of electricity on the day-ahead market (DAM) increased by 7.2% compared to the previous month and amounted to 4,434.4 GWh.

This figure consists of two parts: the volume of purchase and sale on DAM in the IPS of Ukraine, which in December amounted to 4,086.6 GWh (+ 9.9% compared to November), and the volume of purchase and sale on Burshtyn TPP energy island of, which decreased in December by 16.8%, to 347.7 GWh. The decrease in sales on Burshtyn TPP energy island occurred due to a decrease in production at this station, which switched to lower production volumes at the end of the year due to the receipt of cheap imported electricity.

In turn, the volume of purchase and sale of electricity on the intraday market (IDM) in December almost halved, by 48.9% compared to November, to 103.4 GWh and returned to the level of October.

In December, 338 active participants took part in the work of both market segments, while in November there were 330 companies and 321 companies participated in October.

According to the results of the last month of the last year, the weighted average price on DAM decreased by 9.4% compared to November prices, to 1239.05 UAH/MWh. In total for two months, November and December, and under the pressure of cheap imported electricity from Russia and Belarus, DAM prices fell by 20.7%.

According to Market Operator, the largest share of electricity sold on DAM owned by Guaranteed Buyer in the power system as a whole decreased significantly: to 36.62% from 50.62% in November. For comparison, in October this figure was 37.19%.

Electricity production in Ukraine: renewables showed a significant increase
Electricity exports from Ukraine grew by 4.9% in 2019
Electricity imports to Ukraine has reached 81% of exports since the launching of the market 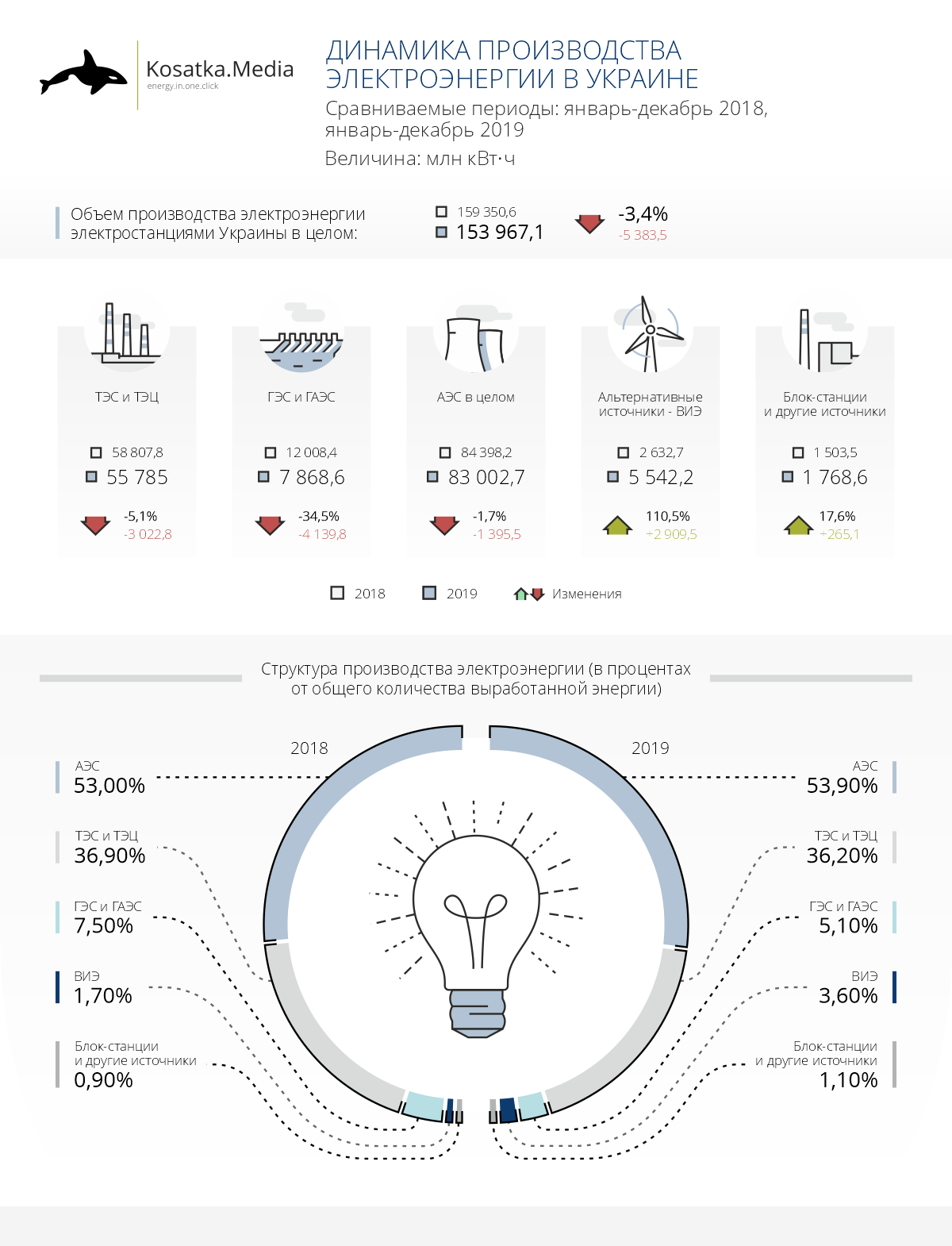 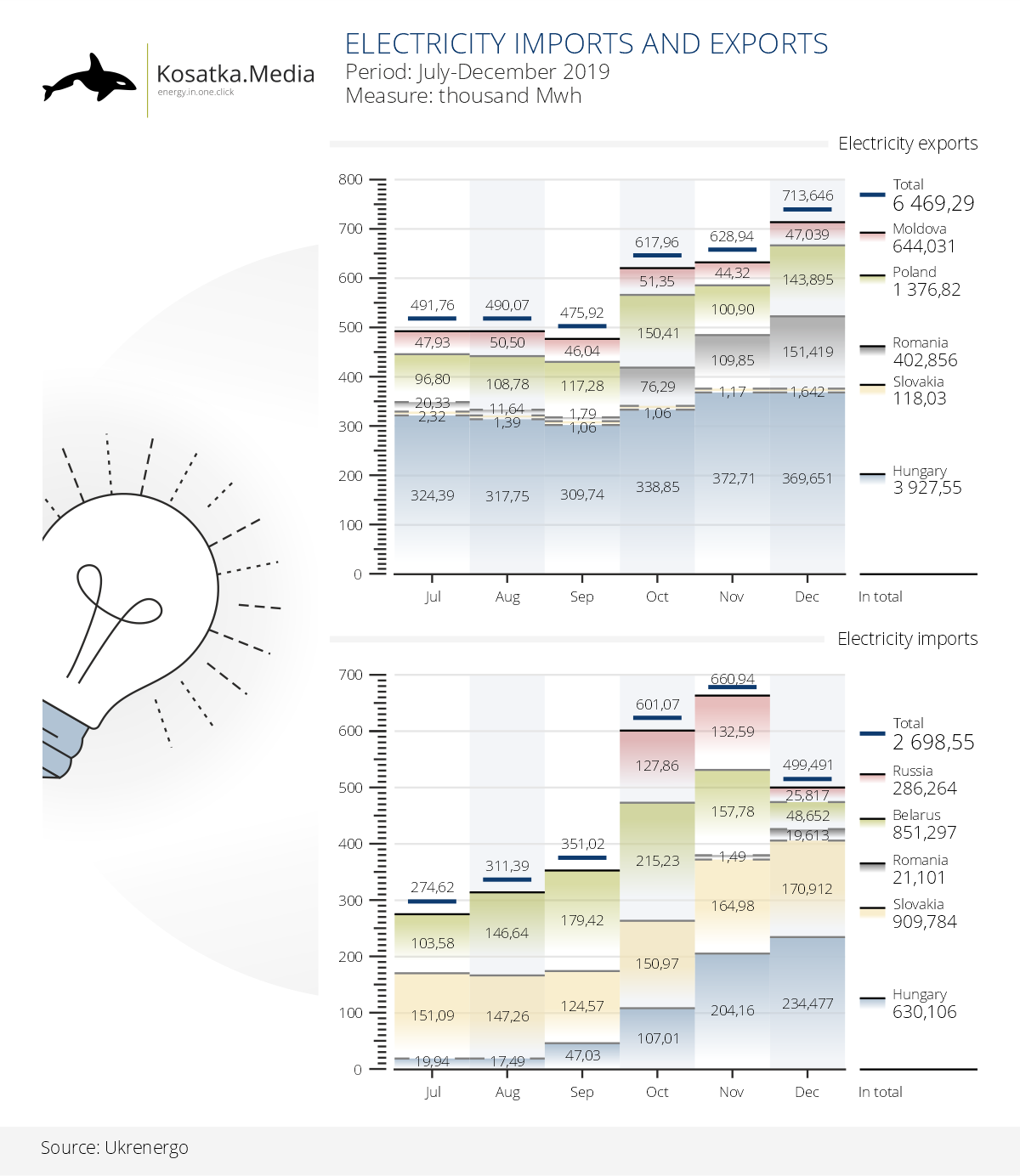 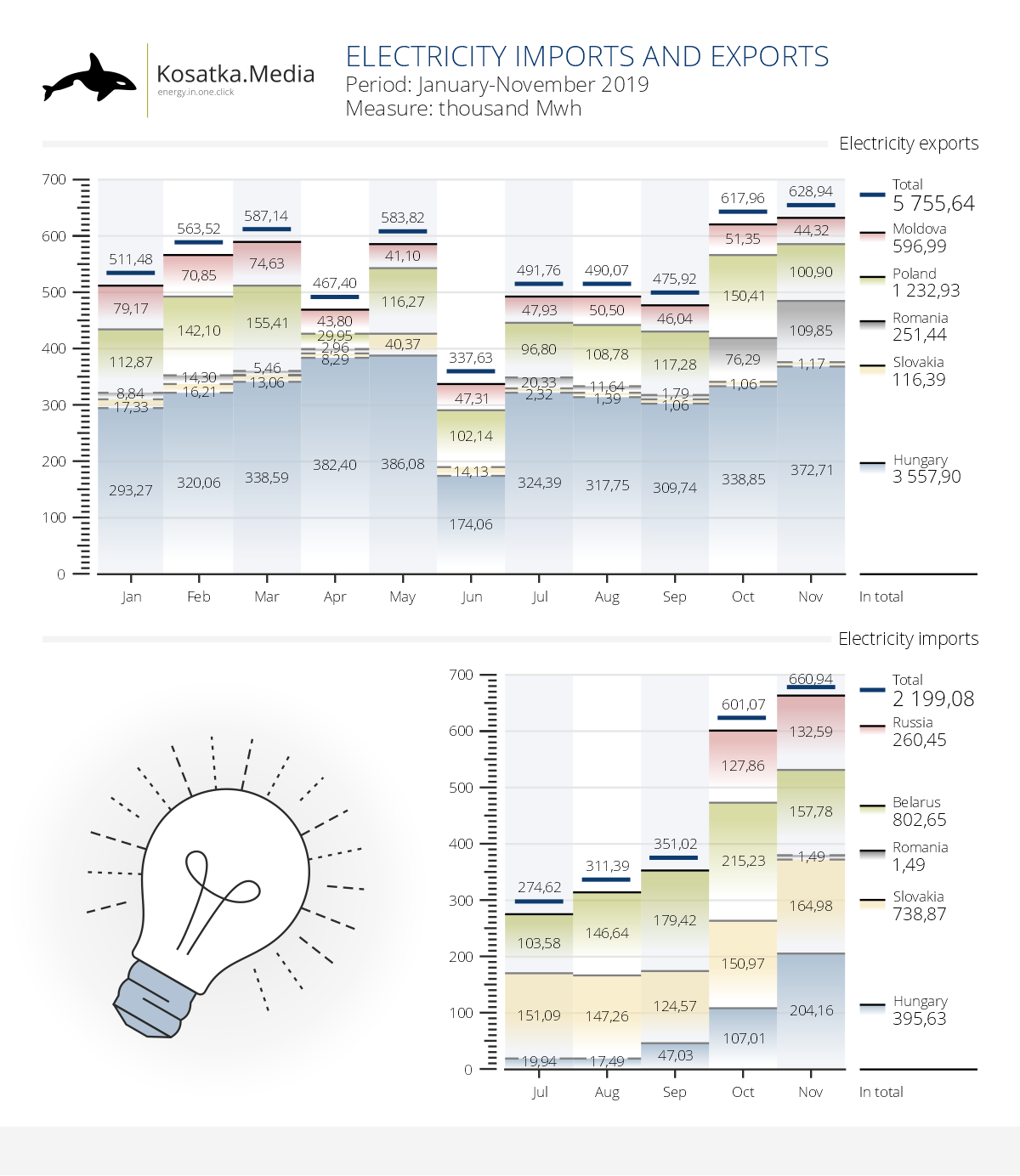 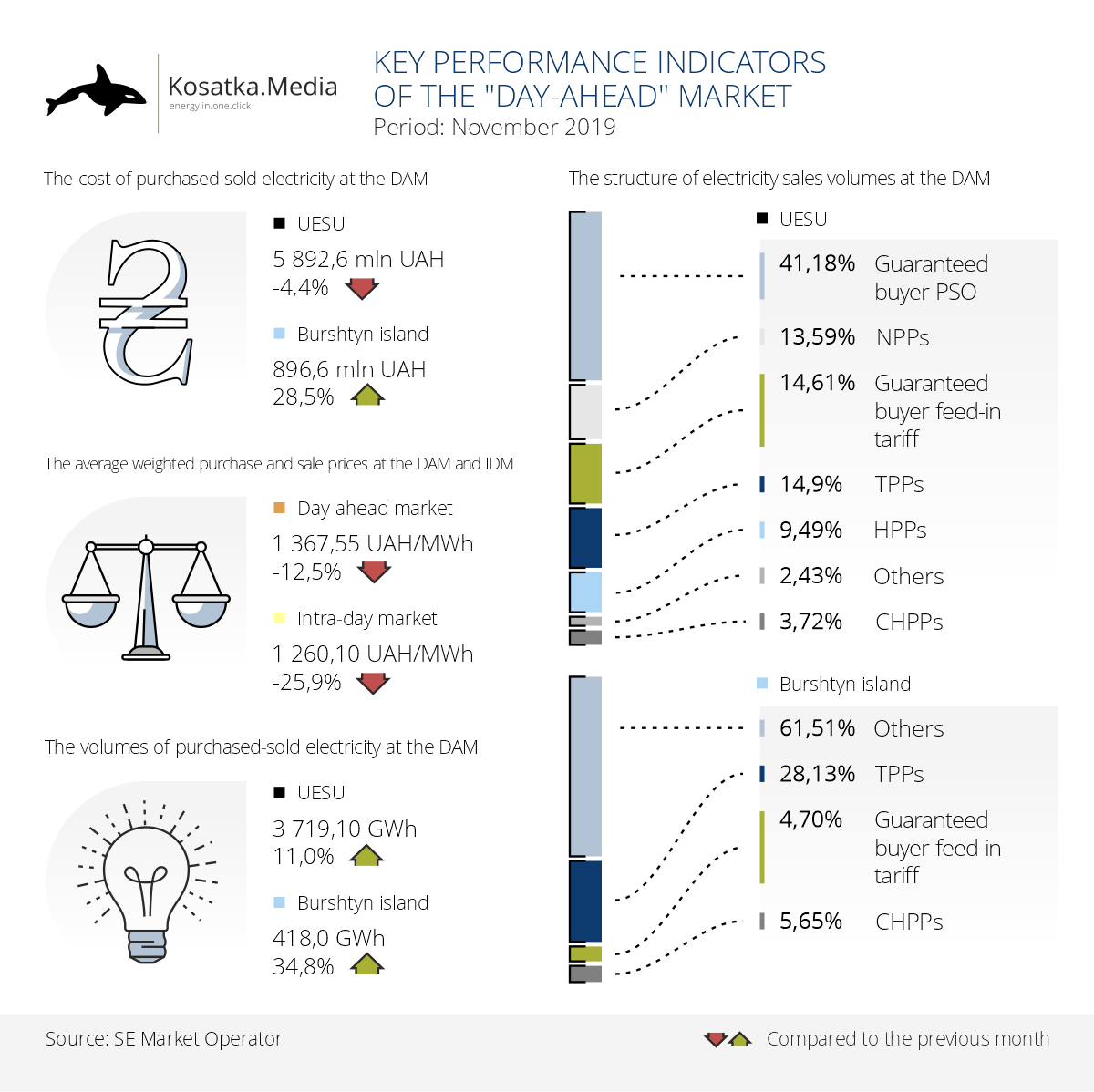 Trading volumes are growing on the Ukrainian energy market