Today, by secret ballot of the NKREKU members, Valerii Tarasiuk was elected as Head of the Regulator in accordance with Article 9 of the Law of Ukraine “On the National Energy and Utilities Regulatory Commission”. This was reported by the press service. 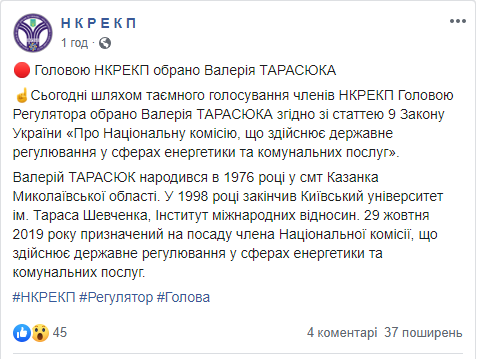 Oksana Kryvenko remains a member of the National Regulatory Commission.

It should be reminded that earlier two members left the Regulator - Oleksandr Formahey and Yevhen Mahlovannyi. They left the Commission by their own choise.

Subsequently, President of Ukraine Volodymyr Zelenskyy appointed four temporary members of the National Energy and Utilities Regulatory Commission, as ex-head of the Кegulator Oksana Kryvenko asked to expedite the process of appointing new members for timely certification of a new operator of the gas transmission system (GTS).