Vasyl Mokan, People's Deputy of Ukraine, Deputy Chairman of the Verkhovna Rada of Ukraine Committee on Youth and Sports, wrote on his Facebook page that at today's extraordinary meeting, the Cabinet of Ministers of Ukraine dismissed Olha Buslavets from the post of interim Minister of Energy of Ukraine.

He also said that Yurii Mykolayovych Boyko (Deputy Minister of Energy) was appointed as the interim Head of the Ministry. 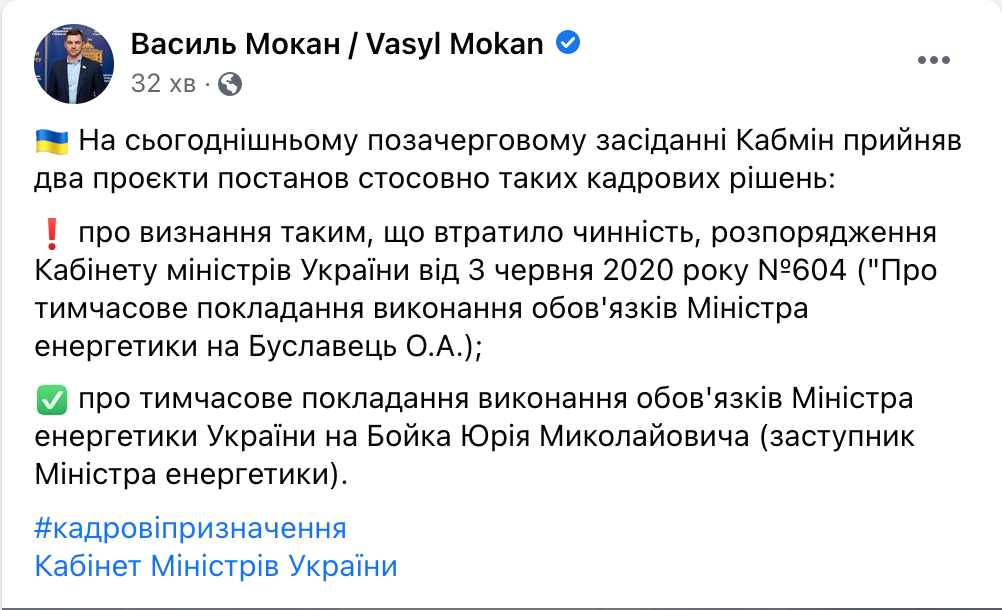 Also, orders signed by Prime Minister Denys Shmyhal about the dismissal of Olha Buslavets and the appointment of Yurii Boyko were published on the governmental website.

Recall that in mid-April, the Cabinet of Ministers appointed Olha Buslavets first Deputy Minister of Energy and Environmental Protection and Acting Minister.

As reported, the Cabinet of Ministers of Ukraine had appointed Yurii Boyko Deputy Minister of Energy and Environmental Protection in May.

It is noted that Yurii Boyko is a power engineer by profession, has been working in the energy sector for 25 years. Before his appointment, he worked as Deputy Director for Economics and Finance of SC Energorynok.

From October 2014 to May 2020, he worked as Deputy Director for Economics and Finance at SC Energorynok.