The Appeals Chamber of the Higher Anti-Corruption Court upheld the appeals of the SAP prosecutor and selected preventive measures in the form of detention for Dmytro Vovk, former head of the National Energy and Utilities Regulatory Commission, and Volodymyr Butovskyi, deputy head of the Commission. This was reported by the press service of the Specialized Anti-Corruption Prosecutor's Office. 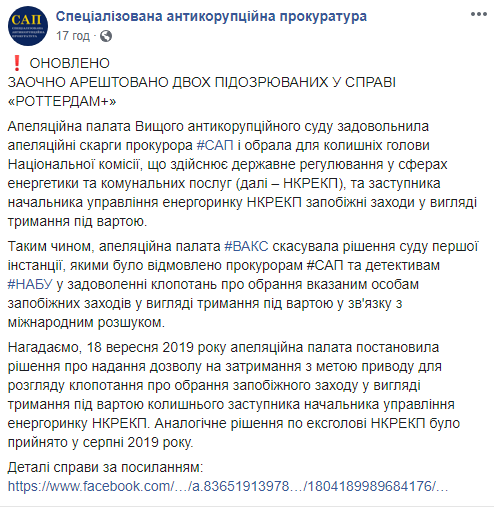 Thus, the Appeals Chamber of the Supreme Anti-Corruption Court overturned the decision of the court of first instance, which denied prosecutors of the SAP and detectives of NABU to satisfy the petitions on the selection of measures in the form of detention in connection with the international search.

Earlier it was reported that the Commission elected a new leader – Valerii Tarasiuk.

Energoatom commented on proposed changes to the charter