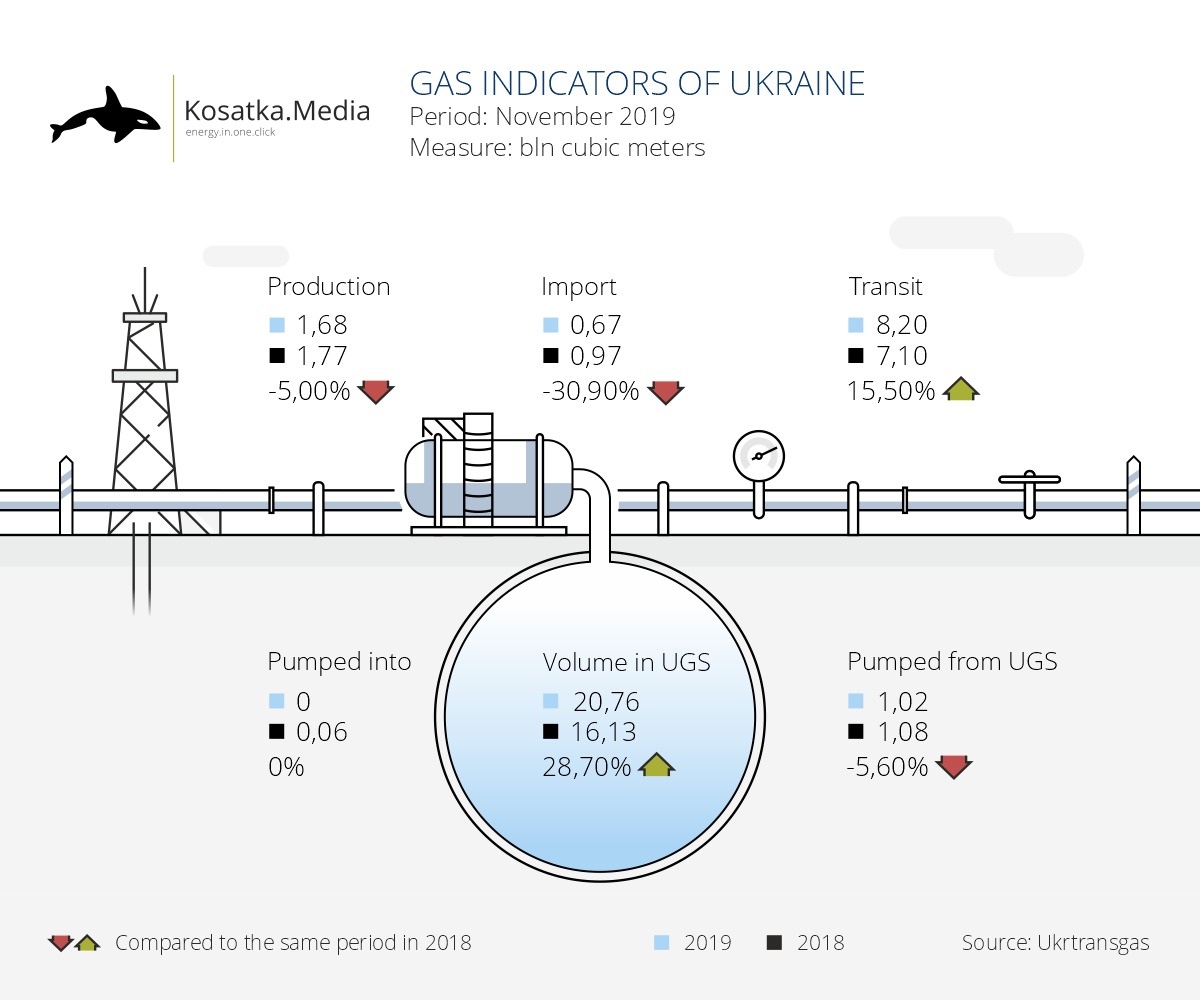 From the first days of November, Ukraine began to consume natural gas located in underground gas storages (UGS) and until the beginning of December Ukrtransgaz raised 1,022.5 million cubic meters of gas. Traditionally, the season of pumping natural gas into underground storages ends on October 31, and its pumping out begins on November 1. This occurs as a result of a gradual decrease in ambient temperature and an increase in consumption by cities heating companies and private households.

Throughout 2019, Ukrainian companies imported natural gas on a monthly basis in the following volumes (weighted average per day):

Following 11 months of this year, gas imports amounted to 13.96 billion cubic meters, 41% more than the corresponding period last year. As previously reported, high volumes of gas imports were caused by Ukraine’s preparations for projected interruptions in product transit from January 1, 2020 against the backdrop of trilateral negotiations between Naftogaz, the European Commission, and Gazprom that have not yet been completed.

According to recent statements by Naftogaz executives, due to the maximum gas reserves in storage facilities accumulated this year over the past 10 years, Ukraine in the first quarter of 2020 may not import this energy source at all, which will help to pass the heating season quietly even if transit stops from Russia.

In November 2019, Ukrainian gas producers produced 1.68 billion cubic meters of natural gas (the weighted average was 55.9 million cubic meters/day, which is 1.5% more than in October). Thus, the average daily level of gas production in Ukraine in 2019 reached a minimum in September, after which it began to increase in October and November.

The dynamics of the average daily natural gas production in Ukraine in 2019:

The total production for 11 months amounted to 18.86 billion cubic meters, which is 1.2% less than a year earlier.

Gas transit through Ukraine increased by 15.4% in November this year compared to the same period in 2018 and amounted to 8.2 billion cubic meters.Representatives of Naftogaz commented that Gazprom was trying to transport the maximum possible amounts of gas to Europe to increase its reserves in European underground storage facilities to profitably sale it in early 2020.

According to them, such a significant increase in transit volumes may indicate that the Russian company is ready to stop the transit of energy through Ukraine from January 1, 2020, which will inevitably lead to a sharp and strong increase in spot gas prices on the European market, and Gazprom will take advantage of this and sell its large gas reserves in Europe at the highest possible prices.

Ukrtransgaz has transported 81.52 billion cubic meters of natural gas in a transit mode since the beginning of 2019.