The Russian company Gazprom has announced the conditions for the continuation of the transit contract in 2020. Among them is the restoration of direct purchases of Russian gas. This was stated by Head of Gazprom Alexey Miller.

The Russian side also noted that Naftogaz must refuse winnings in the international arbitrations.

“The second issue is Ukraine’s readiness for direct purchases of Russian gas since 2020 and the determination of the volume of such purchases. The decision of the Ukrainian side directly affects the throughput capacity of the Russian gas transmission system, which Gazprom should support on the border with Ukraine”, the press service of Gazprom said.

Energy Minister Olexiyy Orzhel said that the next technical consultation on signing gas transmission agreements will be held on November 8 in Brussels.

The Head of Naftogaz of Ukraine recently announced that the Russian Federation proposes to “nullify” almost $3 billion for the Stockholm decision and abandon the lawsuit for another $12 billion. The Antimonopoly Committee of Ukraine also proposes to waive the fine of about $7 billion. The total amount is $22 billion. 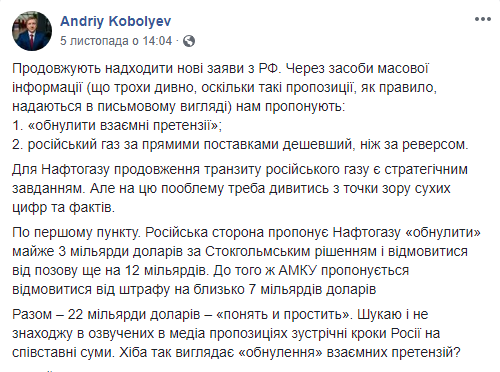 Gazprom filed an appeal in the Polish PGNiG case

Gas imports grew by 30% in January-May