Iran is opposed to the construction of a gas pipeline in the Caspian Sea, as it could seriously damage the region’s ecology.  This was stated by representative of the National Gas Company (Iran) Behrouz Namdari, Iranian government agencies reported.

“The construction of a gas pipeline from east to west of the Caspian Sea may cause severe damage to the region’s ecology... Iran is opposed to its construction”, said Namdari, speaking at the Caspian Economic Forum.

He recalled that Iran offers neighbors to use its infrastructure – gas pipelines and terminals to supply gas to world markets.

This is the second statement in a day against the construction of the Trans-Caspian gas pipeline, through which Turkmen gas have to flow through Azerbaijan to Europe.

Just before the First Deputy Chief of the Central Office of the Government of the Russian Federation Sergey Prikhodko said that “the interests of preserving the unique ecosystem of the Caspian have an absolute priority over any hypothetical economic projects”, ITAR TASS reports.

The Convention on the Legal Status of the Caspian Sea, signed on August 12, 2018, provides that such projects have to be agreed only between countries through whose territorial waters the pipeline passes.  However, later, the Russian Foreign Ministry explained that the laying of the gas pipeline would require coordination with all the Caspian Five countries (Russia, Azerbaijan, Iran, Kazakhstan and Turkmenistan) in accordance with the protocol to the 2003 Tehran Convention on Environmental Impact Assessment in a transboundary context.

Consequently, transit pipelines through the territory of Kazakhstan and Russia are the only ways of delivering Turkmen energy to the West.

Head of NJSC Naftogaz of Ukraine Andriy Kobolyev, in turn, responded to this statement:

“Turkmen gas is extremely important for the diversification of gas supplies to Europe.  For decades, Russia has blocked its direct access to this solvent market, imposing its mediation, buying and selling from itself with great benefit.  Russia, like any autocratic state, cannot exist in conditions of free competition.  Moreover, it does not want to lose gas as an instrument of political pressure”. 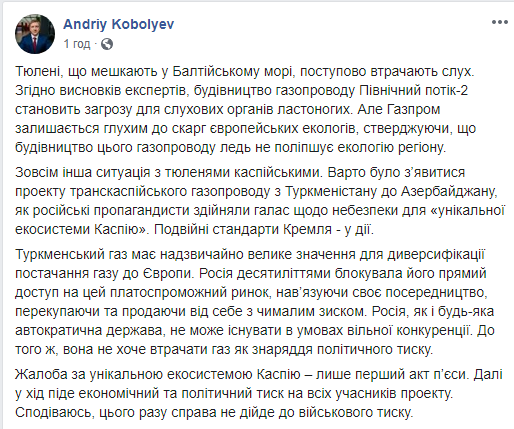 Coronavirus cuts China’s CO2 emissions by 100 million metric tonnes
Makohon: Ukraine will still be the best option for gas transit in 5 years
Gerus: the deterioration of gas production is one of the most painful issues for Ukraine

Makohon: Ukraine will still be the best option for gas transit in 5 years

Gerus: the deterioration of gas production is one of the most painful issues for Ukraine

Dolphin field will be auctioned by two lots – Opimakh