The Cabinet of Ministers of Ukraine has updated the plan for separating natural gas transmission activities from Naftogaz of Ukraine, said Minister of Energy and Environment Olexiy Orzhel at a briefing in Kyiv on Wednesday, Interfax-Ukraine reports.

“Today we updated the unbundling plan, set clear deadlines, a clear responsibility for each of the parties (responsible for implementation – ed)”, he said. 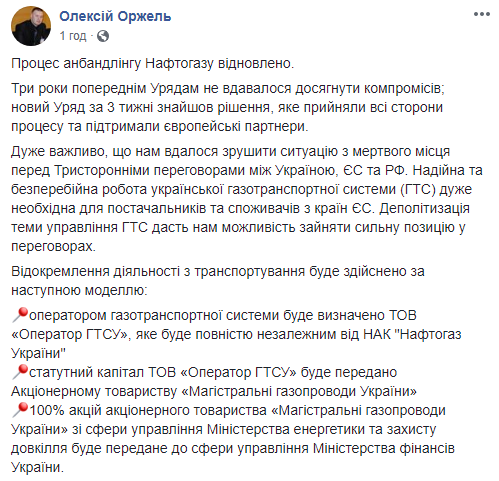 Orzhel noted that the decision met European requirements and was supported by Naftogaz of Ukraine, whose leadership was in conflict with Volodymyr Groysman’s Cabinet of Ministers regarding the choice of unbundling model.

The Cabinet of Ministers also announced a decision to subordinate the company “Gas Pipelines of Ukraine” to the Ministry of Finance.

“We transferred this company to the Ministry of Finance, it was a requirement of our European partners”, said Orzhel.

As it is known, the preferred model of unbundling was the ISO model (Independent System Operator), which protects the interests of Ukraine in the framework of arbitration against Gazprom ($12 billion). Unlike the OU (Ownership unbundling) model, which Groysman’s Cabinet of Ministers insisted on, ISO does not require the privatization of the Ukrainian GTS.