Kyiv district administrative court has stopped the action of the resolution of the Cabinet of Ministers in part, according to which NJSC Naftogaz of Ukraine has to pay dividends to the state in the amount of 90% of the company's net profit in 2018 until July 1, 2019. UNIAN reports it.

Naftogaz on time, before July 1, paid dividends to the state budget for 2018 in the amount of 30% of the profits – this fully complies with the requirements of the law “On management of state owned objects”, said Andriy Kobolyev. 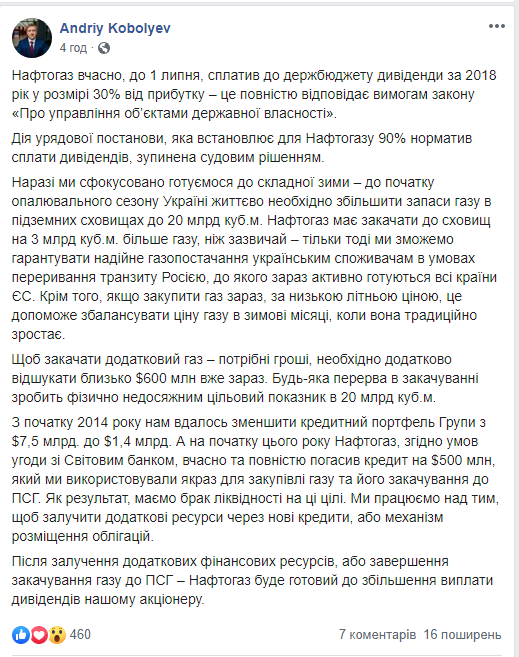 The court suspended the resolution of the Cabinet of Ministers of Ukraine dated April 24, 2019 “On approving the basic standard of deducting part of the profits allocated to pay dividends based on the results of financial and economic activities of business entities in 2018, in the authorized capital of which there are corporate rights of the state” exclusively of the company Naftogaz of Ukraine, in the part where for companies that, according to the results of 2018, received a net profit of more than 50 million UAH, a basic dividend rate of 90% was approved.

The decision of the Cabinet of Ministers indicates the basic standard, according to which, due to the results of 2018, if the company's income amounted to more than 50 million UAH, it should transfer 90% of dividends, if the profit is less than 50 million UAH – 50% of dividends. In this case, the payment of dividends must occur no later than July 1 of the year that follows the reporting period.

However, for four enterprises (State Savings Bank of Ukraine, Ukrhydroenergo, Ukrzaliznytsia and United Mining and Chemical Company), a standard of 30% was approved without reference to the size of their profits in 2018.

In turn, the head of NJSC Naftogaz of Ukraine, Andriy Kobolyev, noted that after attracting additional financial resources, or completing gas injection into UGS, Naftogaz is ready to increase dividend payments to the state budget.

“To upload additional gas, we need money, we need to additionally find about $600 million right now. Any break in the uploading will make a target of 20 billion cubic meters physically unattainable”, he said.

Gas market participants owe GTSOU UAH1.6 billion
Vitrenko said the Ministry of Energy had a different solution concerning the gas price
The European Parliament adopted a resolution on sanctions against the Russian Federation