NJSC Naftogaz of Ukraine filed a “Statement of Defense and Counterclaims” with the Russian Gazprom to the Stockholm Arbitration Court. This was announced by Executive Director of Naftogaz Yurii Vitrenko on his Facebook page.

On April 18, 2018, Gazprom appealed to the Stockholm Arbitration Court to demand the commencement of arbitration. The Russian company requires amendments to the contract, because it believes that the transit contract imposes “unreasonably excessive obligations” on it – Gazprom’s contractual obligation is to submit at least 110 billion cubic meters of gas per year for transit.

“Naftogaz appealed to the arbitration on July 6, 2018 with a request to review the transit tariff, which is valid from March 13, 2018 (the date of contacting Gazprom to revise the tariff) until the end of the contract (January 1, 2020) and compensation for the failure of Gazprom to submit obligations for transit not less than 110 billion cubic meters a year since 2018 (for previous years we were awarded compensation in a previous arbitration decision)”, he wrote. 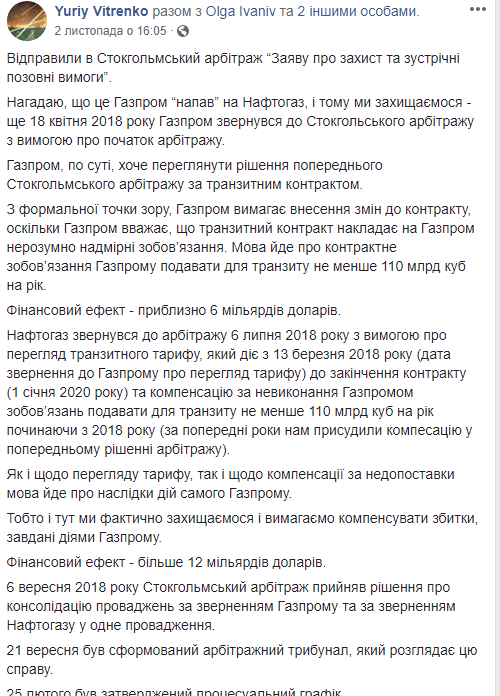 On September 6, 2018, the Stockholm Arbitration Court decided to combine the proceedings of Gazprom and Naftogaz into one.

“The number of pages of only the main text of our Application exceeds 500 pages. 3 reports of international experts that have been specially developed for this are attached. Witness testimonies and a bunch of other applications are also attached”, he said.

Naftogaz also hopes to recover a debt of $3 billion from Gazprom in 2020.

Recall that on October 28 in Brussels the next round of trilateral gas negotiations between Ukraine, Russia and the EU took place. The extension of the contract for gas transit to Europe through the territory of Ukraine was discussed. At the meeting, the parties did not agree, and European Commission Vice President Maros Sefcovic said that he was disappointed because of unsuccessful talks.