Ukrtransgaz performed an annual check of all border gas measuring stations and gas flow metering points at the inlet and outlet of the gas transmission system of Ukraine in 2019, except of the Russian Sudzha. This was reported by the press service.

“The last station that remains to be checked is the Russian Sudzha, which is located on the border between Sumy region (Ukraine) and Kursk region (Russia). At first, Russian Gazprom proposed to conduct an audit from November 11 to November 15, but then announced that it would not be able to receive the Ukrainian delegation during the indicated period and promised to propose new dates. The Ukrainian side counts and insists on conducting an audit of the gas measuring unit this year”, the report said.

Head of NJSC Naftogaz of Ukraine Andriy Kobolyev noted that this situation looks “very suspicious”, since most of the transit of Russian gas to Europe passes through this station.

“We are already used to inconsistent behavior of Russian counterparties. But the lack of agreed volumes of transit gas that entered Ukraine can lead to the resumption of old stories about gas thefts. If the test of Sudzha is not carried out, it will be a signal for European consumers about possible creative actions from the Russian side”, Kobolyev said. 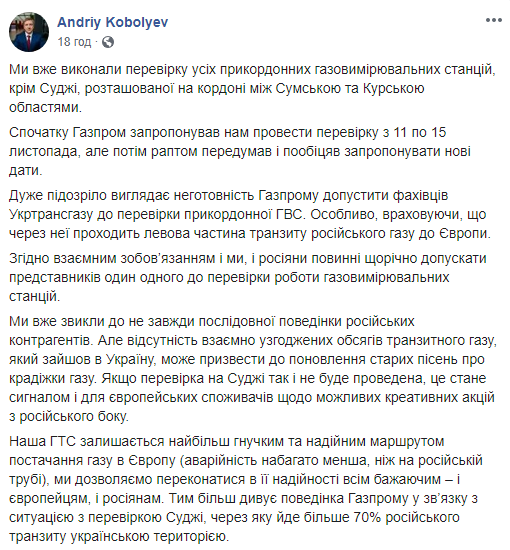 Earlier it was reported that Ukrtransgaz has completed the modernization of Hrebeniki gas measuring station. It is involved in the transmission of gas across the border of Ukraine – Moldova. The modernization of the station made it possible to significantly increase the maneuverability and reliability of the operation of the GTS, especially in the case of the transit termination of Russian gas from January 1, 2020.

Gas reserves in the UGSF of Ukraine increased by almost 26%