The Ukrainian GTS operator reported that in September 2021, the volume of gas transported from the EU to Ukraine amounted to almost 665 million cubic meters of gas, which is the highest figure in 2021.

Gas exports and re-exports in September increased significantly due to the increase in gas supplies to Hungary. In addition to the Hungarian direction, gas was exported to Poland – 9 million cubic meters. 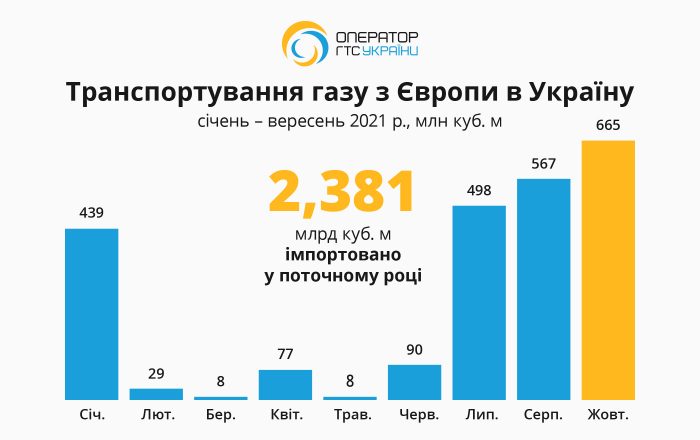 “In September, the activity of market participants significantly increased on the eve of the heating season – gas imports to Ukraine increased, and the return flow of gas from Ukrainian storage facilities to European consumers increased. This natural process became more complicated in October, when the physical transit of gas to Hungary, the main gas exporter to Ukraine in 2021, stopped. The instability of supplies, which arose due to the decision of Russia to redirect gas flows, may increase due to the risk of the launch of the Nord Stream-2 gas pipeline,” the General Director of GTSOU Serhii Makohon said. "The transparency and openness to which European and Ukrainian gas suppliers are accustomed may be lost due to the desire of one player to create bottlenecks for price manipulation."

From October 1, 2021, Gazprom has stopped gas transit through Ukraine in the direction of Hungary. Since the capacity of the gas transmission system from Ukraine to exit to Hungary is booked for the entire gas year (from 01.10.2021 to 30.09.2022) with a volume of 24.6 million cubic meters per day, they will be paid regardless of the available physical volumes of transit.

However, the stoppage of the physical transit of gas to Hungary through Ukraine limits the ability of Ukrainian and foreign customers to import natural gas from the EU using the now cheap route through Hungary. According to the GTS Operator of Ukraine (GTSOU), in 2021 all gas imports from Hungary took place through a virtual reverse. Therefore, without the physical transit of Russian gas, imports in this direction become more complicated and depend on the technical capabilities of the GTS operators in Ukraine and Hungary.

Accordingly, since October of this year, gas imports from the EU to Ukraine have been reoriented to other directions – from Poland and Slovakia.

To recap, Europe decided to check the terms of the gas contract between Hungary and Russia.