Compared to July 2021, gas imports in August increased by 68 million m3. This is mainly due to supplies from Poland, which increased almost 5 times (in July – 7 million m3, in August – about 35 million m3). However, Hungary is still the main destination for gas imports – 87% of the total. As for gas exports, including re-exports, this figure increased by 22 million cubic meters compared to July, due to gas supplies to Hungary. 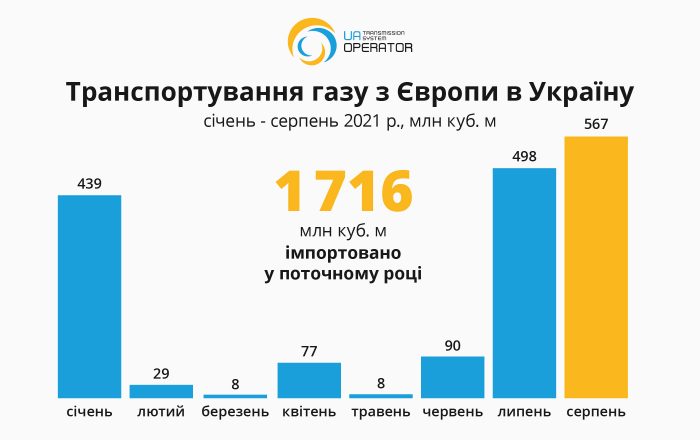 Also in August, a test supply of gas via the Trans-Balkan gas corridor was carried out. Thus, in August, 2,272 thousand m3 of gas was imported from Romania. Now testing of this direction continues.

“We continue to work on the development of natural gas transmission routes in the Trans-Balkan direction to increase import capacities. This will contribute to the diversification of gas sources and better cooperation with our international partners,” Serhii Makohon, General Director of GTSOU said. “Under such conditions, the Ukrainian gas TSO, as an efficient company, has never violated the conditions for gas transportation and has established itself as a reliable partner that will help strengthen Ukraine's international positions in the European gas markets.

The British will be paid to install energy efficient heating systems
Heating season will soon begin in Kyiv, the date has been announced
Regional gas companies continue to increase debt to the GTS Operator

The British will be paid to install energy efficient heating systems

Heating season will soon begin in Kyiv, the date has been announced

Gazprom refused to book additional capacity of GTSOU for November