Gas imports compared to the previous month decreased by 77% or 510 million cubic meters. After stopping the physical transit of gas to Hungary, imports from this country to Ukraine decreased 16 times but did not stop completely due to the virtual reverse. In October, 37 million cubic meters of gas were imported from Hungary. 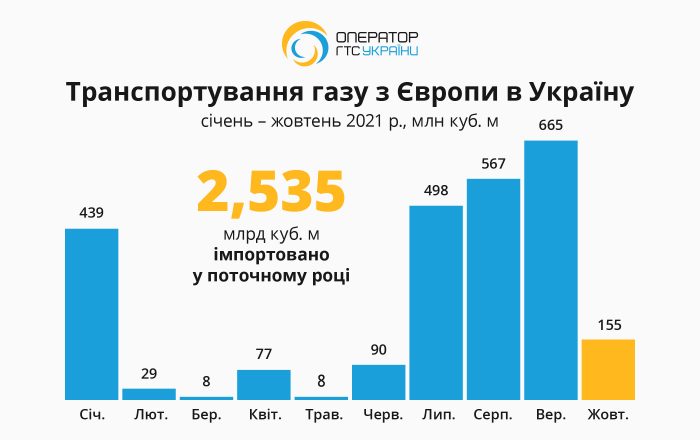 Also in October, Moldova, for the first time in many years, ordered not only Russian gas but also used the services of alternative suppliers. From Ukraine to Moldova 11.2 million cubic meters of gas were exported by five suppliers.

To recap, from October 1, 2021, Gazprom stopped the transit of gas through the territory of Ukraine in the direction of Hungary.

“The October results show that the stoppage of the physical transit of gas to Hungary through Ukraine significantly limited the ability of Ukrainian and foreign customers to import gas along this route. However, due to the availability of alternative routes, customers switched to import from Slovakia,” the message says.

To recap, Gazprom did not book capacity for the first quarter of 2022 through Ukraine and Poland.

As reported, gas consumption would be calculated differently in Ukraine.