The gas storage operator Ukrtransgaz announced the end of the season of gas withdrawal from Ukrainian UGS facilities, which lasted 194 days.

It is mentioned the season was distinguished by the highest withdrawal volumes in seven years – 13.2 billion cubic meters.

Over the past six months, the company has entered into cooperation agreements with 111 companies from Ukraine, the EU, North America and Asia.

In April 2021, 0.7 billion cubic meters of gas were withdrawn from Ukrainian underground storage facilities, which is more than 35 times more compared to the same period in 2020. 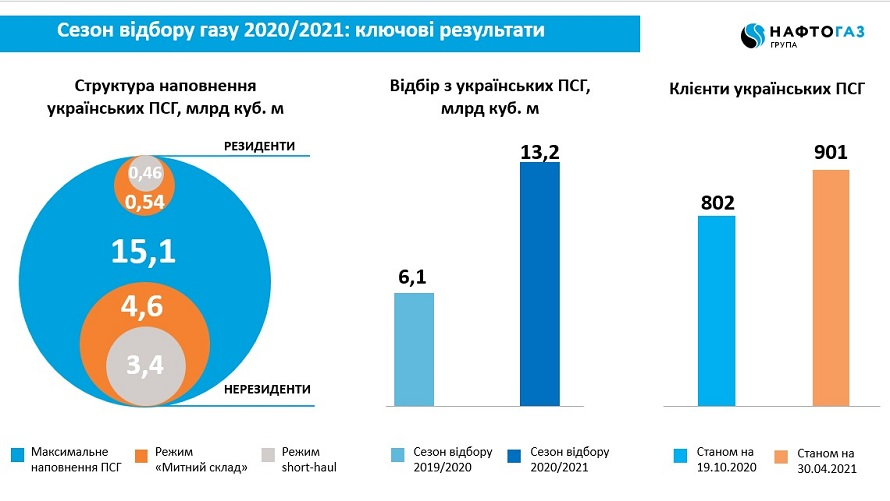 Resident companies store 0.54 billion cubic meters in the customs warehouse mode, which is 2.2 times less than in the same period in 2020. Of these, the volume of gas injected into the UGS facility in the short-haul mode is equal to 0.46 billion cubic meters.

As of 01.05.2021, the natural gas stocks in underground storage facilities amounted to 15.1 billion cubic meters of gas, which is 8.3% less than the same period last year.

“This withdrawal season was special for the Gas Storage Operator. Two groups of factors played a role. On the one hand, there is a favourable price environment, in particular, the difference in price quotations for gas in summer and winter, as well as favourable tariffs for gas storage in Ukrainian UGS facilities. On the other hand, the new business processes of the company, which we have been adjusting throughout the last year, have proved their effectiveness. For the first time, Ukrainian gas storage facilities worked to ensure the heating season not only in Ukraine but also in the EU countries, because the gas in our subways was stored and continue to be stored by dozens of non-resident companies,” said Serhii Pereloma, acting General Director of Ukrtransgaz.

As a reminder, in the first quarter of 2021, Ukrtransgaz received a net income of UAH 1.3 billion.

Earlier it was reported that gas injection has begun into Ukrainian UGS facilities.

Ukraine could get €200 million to renew public transport
Spanish startup: solar panels on balconies, awnings and boats
The Cabinet of Ministers approved the candidacies of four members of the Supervisory Board of Ukrenergo