The date of trilateral negotiations on the supply and transit of Russian gas through Ukraine to the EU will be agreed in the near future.

The date of trilateral negotiations on the supply and transit of Russian gas through Ukraine to the EU will be agreed in the near future. The negotiations are scheduled to be held in September.

Minister of Energy of Russia Alexander Novak announced his readiness for a quick appointment of negotiations’ date:

“We will discuss the date of such a meeting with our colleagues in the near future”, Interfax-Ukraine agency quoted Novak, Business Censor reports.

“After returning from a business trip... we will contact our colleagues and arrange the time for such a meeting. We previously agreed that such a meeting would be in September. Now we need to specifically agree on a date, which satisfies all three parties”, the Russian Minister added.

The representative of the third interested party, European Commission Vice President Maros Sefcovic, said about a productive telephone discussion on Tuesday with the new Minister of Energy and Environmental Protection of Ukraine Olexiy Orzhel.

“It’s good to have a partner with such an excellent track record in the field of energy”, Sefcovic wrote on Twitter.

The Ukrainian side is ready for tripartite gas negotiations to be held in Brussels in September”, said Minister of Energy and Environmental Protection Olexiy Orzhel in a conversation with European Commission Vice President Maros Shefcovic.

“The Ukrainian delegation, which I will head, is ready to take part in tripartite gas negotiations this month”, the press service of the Ministry quoted Orzhel.

In addition, as part of the conversation, the parties discussed the process of Naftogaz’s unbundling and the need for its earliest completion. 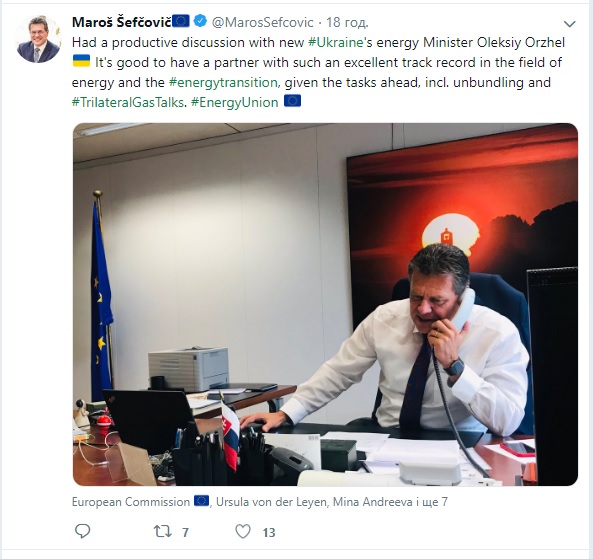 Recall, Novak said earlier that Ukraine, Russia and the European Commission can resume tripartite consultations on gas issues only in the second half of September. At the same time, the position of Gazprom, which was announced earlier, is to extend the existing transit contract, which expires on January 1, 2020, and not to sign a new one, according to European rules. Gazprom also demands Naftogaz to refuse to recover $2.6 billion from foreign courts in accordance with the decision of the Arbitration Institute of the Stockholm Chamber of Commerce.

Naftogaz of Ukraine, in turn, stated that the Russian side was deliberately dragging out time, since both in May and in June the Russian Federation refused to agree on trilateral negotiations on the proposal of the European Commission. The delay is also due to the fact that Gazprom is actively promoting Nord Stream 2 and Turkish Stream projects, which will allow delivering gas to Europe bypassing the Ukrainian GTS.

At the same time, new head of government, Olexiy Honcharuk, announced plans to sign a long-term contract for transit.