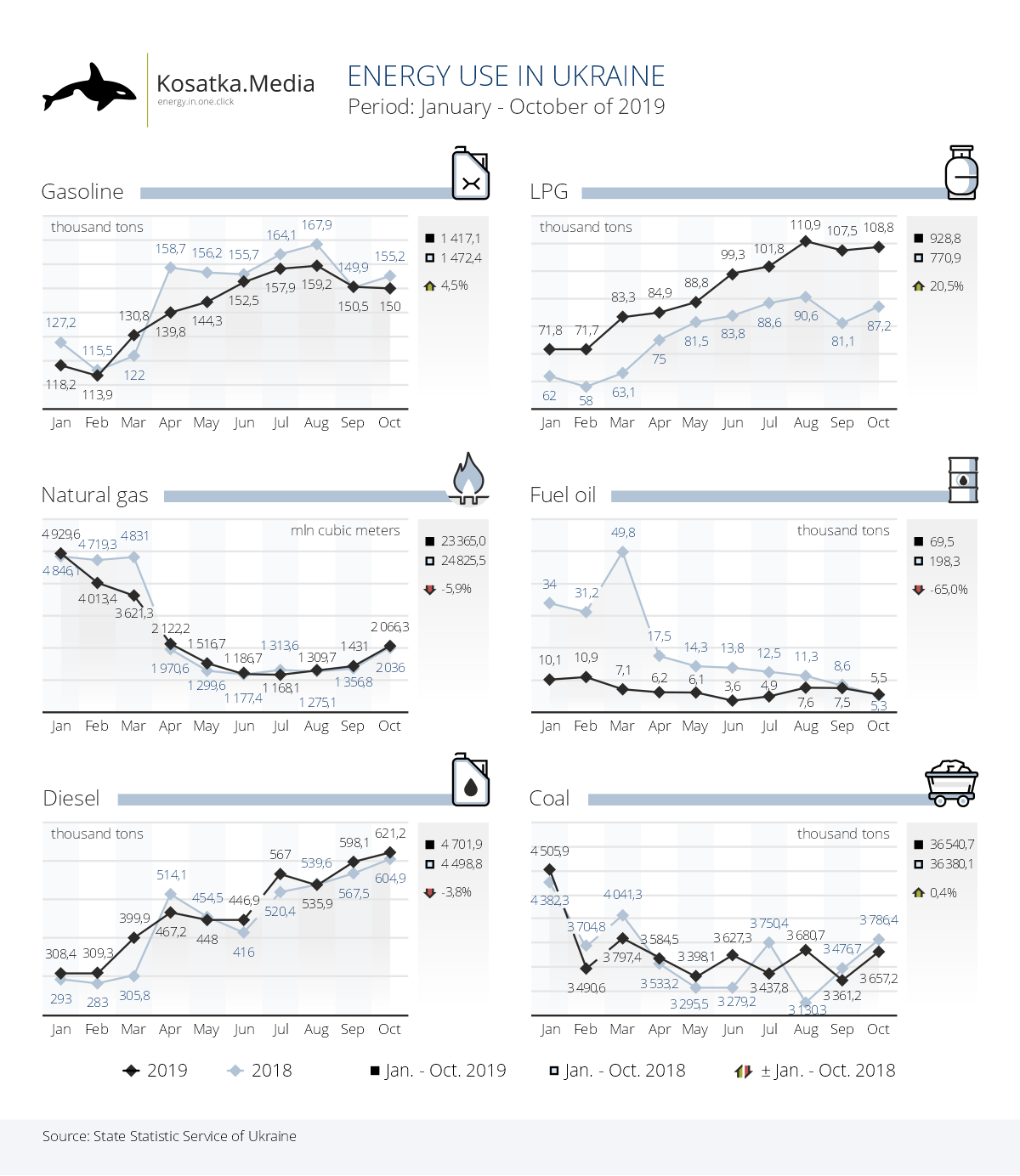 The consumption of liquefied petroleum gas (LPG) continues to increase in the Ukrainian market this year due to its price attractiveness compared to gasoline. Thus, gas refueling operators reported an increase in the amount of fuel sold by 20.5% in January-October 2019, to 928.8 thousand tons.

According to market participants, over the past three years, about 200 thousand car owners switch to propane-butane as a fuel for cars annually. Liquefied gas is a direct competitor only to gasoline, since the conversion of diesel-powered cars to the use of propane-butane is technically very difficult and is not carried out in large quantities, with the exception of experimental samples.

At the same time, gasoline consumption in Ukraine in January-October fell by only 3.8% compared to the same period last year, to 1,417.1 thousand tons. The State Statistics Service’s statistics on gasoline shows a real reduction in the balance of the gasoline market (production and import minus export), while such a sharp increase in propane-butane sales figures is explained only by the fact that in 2019 this market began to gradually come out of the shadows.

The problem of illegal gas stations that sell fuel without the whole package of permits for the station itself and often without paying taxes on fuel has been very acute in Ukraine from 2016-2017. According to the Ukrainian Oil and Gas Association, in 2018, about 30-50% of retail sales of gas and up to 20% of diesel fuel in the country were in the shade, depending on the region, and the number of illegal gas station points was about 1,500 gas stations.

The State Statistics Service also recorded an increase in diesel consumption by 4.5% in January-October, to 4.7 million tons. This was the result of a smooth but steady increase in the number of cars in Ukraine using this type of fuel. The growth in the number of cars with diesel engines occurs in two segments: first of all, used cars massively imported from the countries of the European Union, as well as new cars imported from all the largest auto-producing countries. In addition, the general revival of the country's economy this year contributed to the growth of diesel fuel consumption.

Fuel oil lost ground this year, losing competition to cheaper natural gas. This energy carrier is used as reserve fuel at some TPPs and CHPs, and these enterprises consume fuel oil in cases of its lower price in comparison with natural gas. So, in January-October of this year, fuel oil consumption decreased most significantly among all energy resources: by 65%, to 69.5 thousand tons.

Natural gas consumption in Ukraine decreased in January-October 2019 by 5.9%, to 23,365 million m3. This was the result of warmer weather this year than a year earlier, as well as measures taken to improve energy efficiency and reduce gas consumption in the household sector.

The volume of use of coal did not change significantly, increasing by 10% over 10 months to 36.54 million tons compared to the same period in 2018. Electricity consumption in Ukraine continues to increase annually, and the growing needs of the market and the country are covered not only by the rapid development of renewable energy sources, but also against the background of stable operation of thermal power generation.