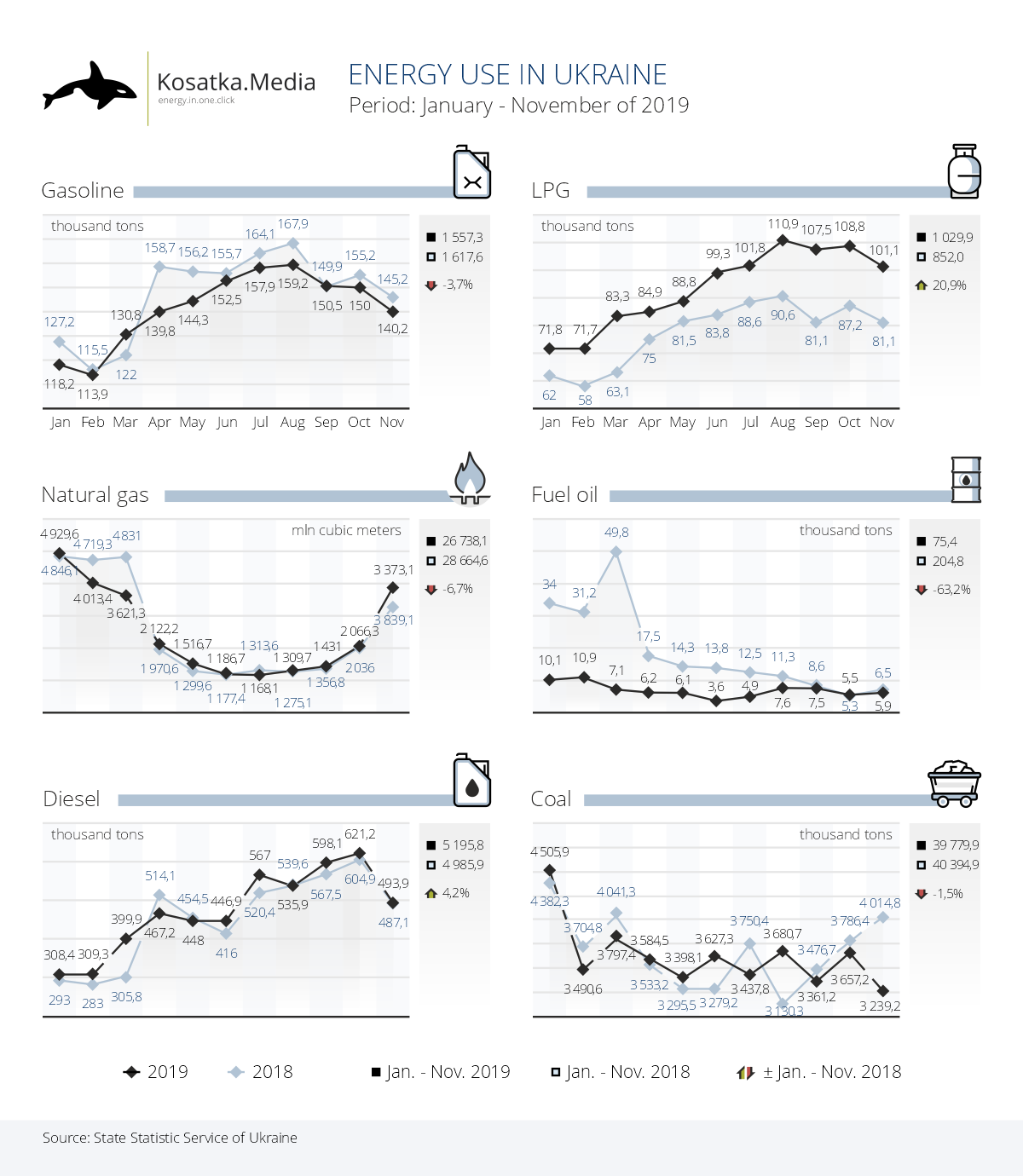 The State Statistics Service recorded an increase in LPG consumption by 24.7%.in November

The consumption of liquefied petroleum gas (LPG) continued to increase on the Ukrainian market last year due to its continued high price attractiveness compared to gasoline. Market participants note that during 2019, the average ratio of the cost of LPG to A-95 gasoline was a record low of about 42% compared to 46% in 2018.

As a result, gas refueling operators reported a 24.7% increase in the amount of fuel sold in November 2019, to 101.1 thousand tons. At the same time, the State Statistics Service does not receive information from about a quarter to a third of gas refueling stations operating in the country, as these gas stations operate illegally and, as a rule, in cash, without reporting to any government departments.

According to the results of 11 months of 2019, state statistics recorded a growth of propane-butane sales by 20.9%, to 1,030 thousand tons. For the whole of 2019, about 150 thousand car owners switched to LPG as fuel for cars, according to experts of automobile market of Ukraine. In particular, the number of cars shifted to autogas is approximately 20 times higher than the number of electric vehicles imported into Ukraine last year, of which less than 8 thousand were imported.

At the same time, gasoline consumption in Ukraine decreased by 3.7% in January-November compared to the same period last year, to 1,557 thousand tons. The State Statistics Committee on gasoline displays a real reduction in the balance of the gasoline market (production and imports excluding exports), while such a sharp increase in propane-butane sales figures is explained only by the fact that this market began to gradually come out of the shadows in 2019.

The problem of illegal gas refueling stations that sell fuel without the whole package of permits for the station itself and often without paying taxes on fuel began in 2016-2017 and especially sharply arose in 2018-2019. The current government of Ukraine has launched a campaign to combat illegal gas refueling stations and in less than a month in the second half of December and the first half of January, about 620 such stations were closed.

The State Statistics Service also recorded an increase in diesel fuel consumption by 4.2% in January-November 2019, to 5.2 million tons. This was the result of a smooth, but steady increase in the number of cars using this type of fuel in Ukraine.

Fuel oil turned in his wings even last year, losing competition to cheaper natural gas. So, in January-November 2019, fuel oil consumption decreased most significantly among all energy resources: by 63.2%, to 75.4 thousand tons.

The use of coal also decreased markedly in November compared to the corresponding month of the previous year due to abnormally warm weather and a decrease in electricity generation by Ukrainian TPPs against the background of increased electricity imports from Russia and Belarus.