The agreement for the import of fuel, concluded with the coal mining company Bohdanka, provides for delivery from August 2021 to January 2022 inclusive. This is stated in the message of the press service of DTEK Energy.

Coal is intended for the needs of DTEK Energy TPPs, in particular, DTEK Zakhidenergo generators, whose stations are located near the border with Poland. The first batch of products is expected to ship next week.

“Coal imports are an extreme and temporary measure to maintain the stable operation of the power system. Ukrainian coal is our key priority, but due to the increased load on our TPPs in July, we are forced to look for additional sources of fuel,” DTEK Energy CEO Ildar Saleev said.

The company said that in 7 months of 2021, 17 new longwalls were put into operation at its mines and almost 10 million tons of gas coal were produced. During the same period, DTEK Energy shipped more than 318 thousand tons of its own coal to state-owned thermal power plants. As of August 12, there were about 480 thousand tons of coal in the warehouses of DTEK Energy TPPs.

In addition to the extraction of Ukrainian coal and imports from Poland, DTEK Energy imports it from Kazakhstan and is also working on the issue of supplying fuel with suppliers from the United States.

What are the coal stocks in Ukraine?

According to the Ministry of Energy of Ukraine, coal stocks in the warehouses of TPPs and CHPPs as of August 12 dropped to 926.1 thousand tons, which is 438 thousand tons less than the accumulation schedule approved by the ministry for that day (1.364 thousand tons). 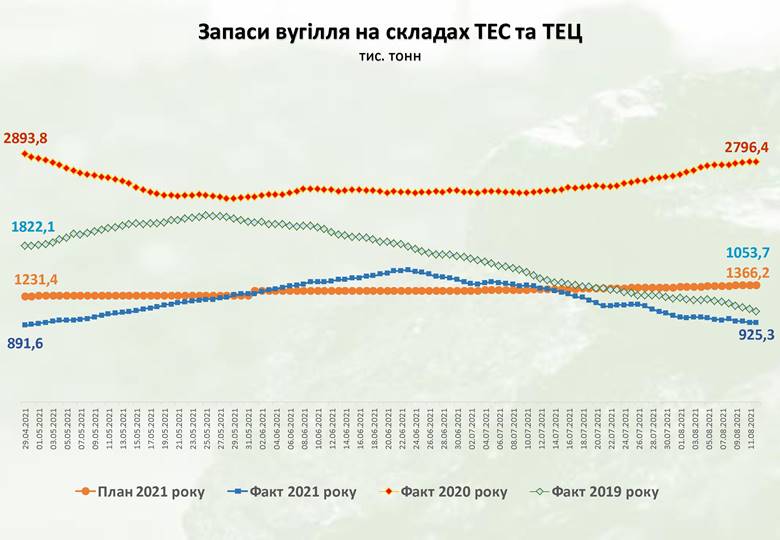