Today, the Verkhovna Rada supported the draft law No.2283 “On Amending the Law “On the State Budget of Ukraine for 2019” in its first reading.

Among other changes, the Parliament supported the allocation of 1 billion UAH for the restructuring of mines. These funds will be allocated as additional funding for the “Restructuring of coal mines” program.

It is noted that financing will ensure timely payment of wages to miners and prevent mines from being disconnected from power supply.

273 deputies voted for the document. At the same time, 266 deputies supported the reduced terms of its preparation for the second reading.

Chairman of the Confederation of Free Trade Unions of Ukraine, MP Mykhaylo Volynets on his Facebook page commented on the decision of the Rada:

“I understand that miners who have not received wages for more than three months are no longer able to wait for the promised funds, but still we hope that the final decision... will be made”.

He noted that the final decision on the allocation of 1 billion UAH will be made “at the next plenary meeting of the Verkhovna Rada of Ukraine on October 29”. Such information provoked a violent reaction in the comments. 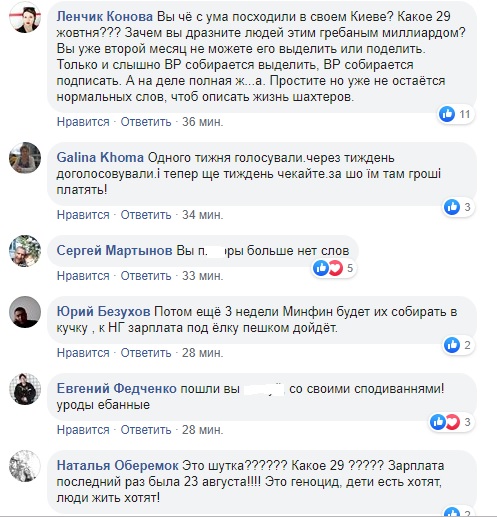