Growing environmental pollution and concern about climate change have given rise to a trend of environmental awareness that makes humanity look for green alternatives to many industrial processes. And lithium-ion batteries are on the list of such alternatives. In addition to the ability to accumulate electricity generated by renewables, but non-permanent, energy sources, they have the ability to reduce the load on the network, and are also a key component of carbon-free transport.

The popularity of “clean” transport in Europe is growing. And against the background of this movement, as well as to attract investment in this sector, in October 2017, the so-called European Battery Alliance (EBA) was created. The main goal of EBA is to make a competitive chain for the production of batteries, which includes all the processes from the production of necessary raw materials to the processing of used batteries. Thus, Europe is trying to take the initiative of the producer of energy storage due to the growing local demand in this segment, but relying on Asian outsourcing (as it was before and still remains today) becomes economically unprofitable and unreliable.

Europe's place among the battery boom

The need for battery production is growing by leaps and bounds. If the current demand for lithium-ion batteries is estimated at 78 GWh per year, by 2023 the demand will increase by 8.5 times – up to 660 GWh, and by 2028 – up to 1100 GWh. There are 2 main drivers that result in such predictions. The first is the global expansion of electric vehicles with the prospect of increasing the number of electric cars to 200 million by 2028. The second driver is increasing the pace of installation of systems for energy storage in the domestic and industrial sectors. Both in the first and in the second case, the battery is a key element around which the entire ecosystem is built.

According to the Benchmark Mineral Intelligence agency, by the end of 2018 there were 296 GWh of installed battery production capacity in the world. Of this amount, only 6.9% is in Europe, while in Asia – 83.4%, in the USA – 9.8%. 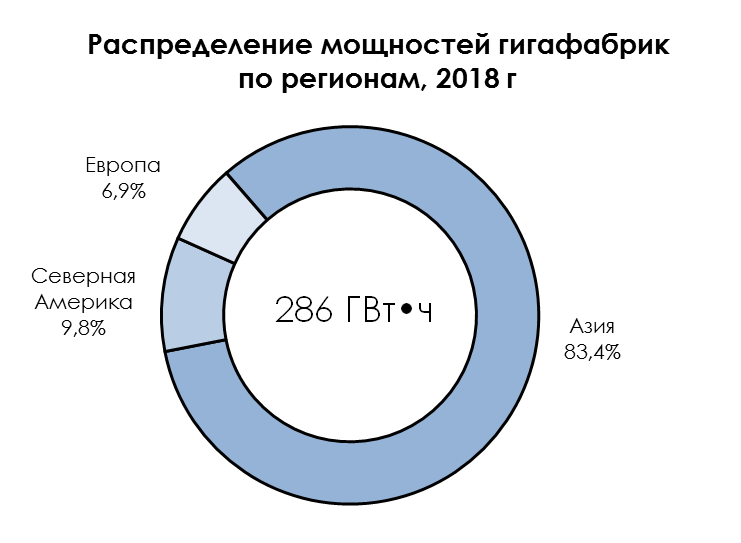 In mid-May 2018, the European Commission (EC) reported on the need to create at least 10–20 so-called “gigafactories” (factories of mass production of battery cells with a production capacity of 1 GWh/year or more) in Europe. Gigafactories will satisfy the need for batteries. By some estimates, by 2025 the volume of the battery sales market in the EU could reach €250 billion and continue its further growth. To miss such a tidbit would be stupid. In April this year, the EC presented a detailed strategy for the implementation of the plan for the creation of production facilities. According to new estimates, Europe will need from 20 to 30 gigafactories and a key factor for success is called “the scale and speed of private investment”.

The European market is open for new capacities, and judging by the mood of Asian companies, they intend to fill the missing links in the production chain. Today, 3 of the 5 most powerful gigafactories of the world are located in China. In Europe, there are several manufacturers, the most confident of which is controlled by the Chinese LG Chem. Their factory, located not far from Wroclaw, Poland, has been manufacturing lithium-ion batteries since 1995, and started producing batteries for cars only in 2000. The production capacity of the plant is 15 GWh/year, it is planned to increase it to 22 GWh/year by 2023. 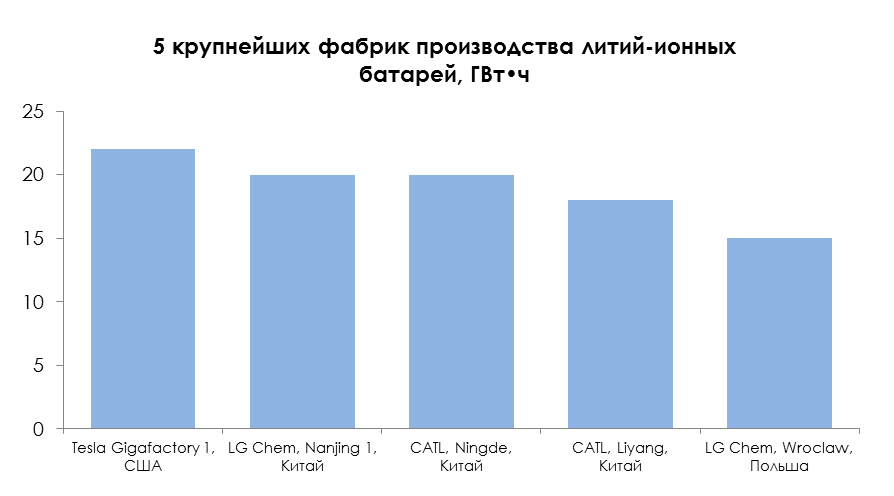 In 2018, the Korean company Samsung SDI completed the construction of a new plant near Budapest. According to representatives of the company, the plant will produce batteries for 50.000 electric vehicles per year.

In the near future in Europe a number of similar gigafactories will start working. Such companies as Northvolt, GigaVaas, CATL, Daimler, SK Innovation and others have already submitted their construction plans, thus, the production capacity may increase by more than 10 times.

If the role of Europe as a producer of  batteries increases significantly, it will increase the consumption of resources required for such production. Given that Europe is in an extremely dependent position on imported resources, which in the future may lead to high costs and financial risks throughout the production chain. Access to the 5 main elements (lithium, nickel, cobalt, magnesium and graphite), which are necessary for the production of batteries, is a key point on the path to the implementation of the plans of the European Commission. Where can Europeans get these resources from?

The role of Ukraine in the chain of batteries production

Europe aims to diversify the supply of necessary materials, including all possible extraction on its territory. And in this context, it is hoped that attention will be paid to Ukraine, since on the territory of our country, according to unconfirmed data, large volumes of lithium are concentrated (500 million tons of lithium oxide). The development of these deposits can significantly simplify the implementation of plans for Europeans. But here the question arises: “Do Europeans know about the wealth of our subsiol?”

Analyzing the next EC report on raw materials for batteries (“Report on Raw Materials for Battery Applications”), which was published in November 2018, the conclusion is that lithium does not exist in Ukraine. Why the European Union does not notice the Ukrainian lithium wealth? And is it only European Union? 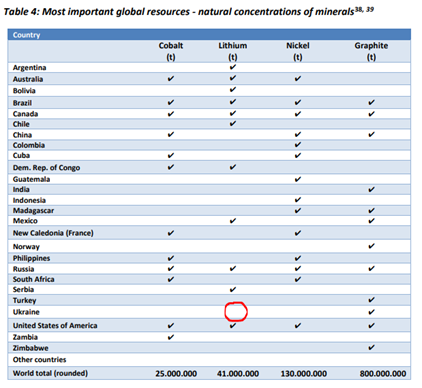 In turn, Volodymyr Omelyan (the Minister of Infrastructure) in a recent interview talked about the presence of both lithium and cobalt in Ukraine, as well as other important components for the production of batteries. The Minister mainly explains the lack of interest of foreign companies in Ukraine by the delay in adopting the law on electric transport, which was developed in 2017.

Will a potential investor pay attention to the wealth of the Ukrainian subsoil? Will Ukraine be able to turn existing resources into economic benefits? Technology does not stand still, and how long lithium will be in such great demand as today is unknown. Successful research, for example, with hydrogen engines can reduce the need for lithium to a minimum. Thus, the timely attraction of investors may mark the beginning of the development of a new industry in Ukraine.