The future of Ukrainian renewable generation is at risk, although its renewable energy sector is very successful and attractive for investors.

This was stated by the managing director of the international financial organization NEFCO Trond Moe, Kosatka.Media reports. In Ukraine, NEFCO provides grants and loans for energy-saving and renewable projects.

The future of renewable energy producers is at risk

Foreign investors are worried about reducing the FIT and incomplete settlements of Guaranteed Buyer for old debts. NEFCO said they expected a return of the invested funds but had already realized that the payment terms would increase significantly. 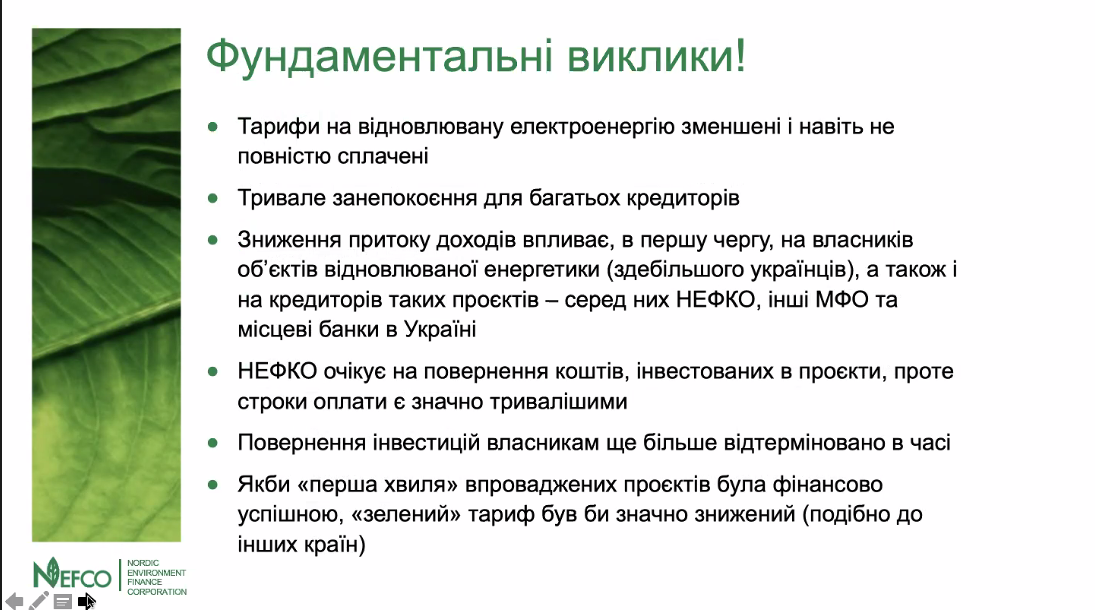 What worries investors in the renewable energy sector in Ukraine. Photo: NEFCO

“If “the first wave” of implementing such projects was financially successful, the FIT would be significantly reduced. As a rule, in other countries, such projects are subsidized at the expense of tariffs, but then they are reduced when tariffs reach recoupment. In Ukraine, this did not happen since tariffs were reduced very quickly. Worse, the decision was made retroactively. And payments for reduced tariffs were not carried out in full. I think the future of Ukrainian renewable energy is at risk,” Moe explained. 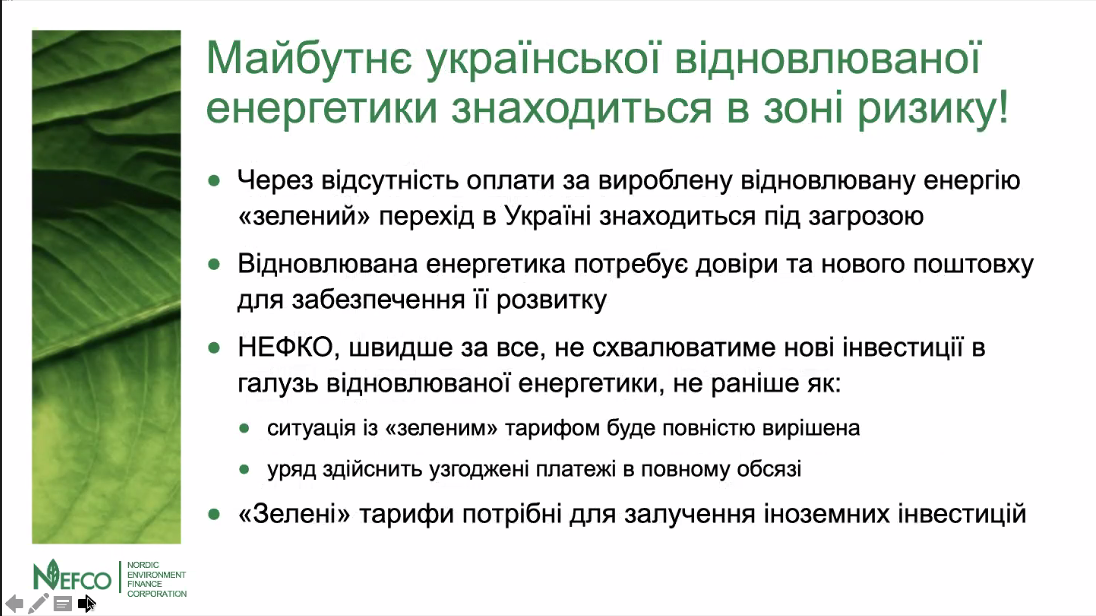 The future of renewable generation in Ukraine is under threat Photo: NEFCO

NEFCO also says that it will most likely not approve investments in renewable energy in Ukraine until the FIT situation is resolved and the state fully pays producers off.

Will investors sue the state?

The organization noted that their clients, like other renewable energy producers, did not receive money from Guaranteed Buyer on time and cannot pay off loans on time.

“The memorandum with the Ukrainian government was a good, right step. Many issues have been resolved. But we are anxious that the government does not finance Guaranteed Buyer and does not pay all the funds stipulated by the Memorandum,” Moe said.

Asked if investors understood that the FITs were initially overstated and not revised in time, therefore, they could have foreseen risks, Trond Moe stated that “it is normal to reduce tariffs, but it is not normal to wipe them retroactively for projects that have already been agreed.”

NEFCO noted that they were not going to sue Ukraine because of the retrospective revision of the feed-in tariffs.

“We sympathize with our partners in this situation. But we, of course, will not file any claims against Ukraine. This is more about project owners and the Ukrainian authorities. We give money for projects, but we have no direct relationship with the authorities,” explained the Managing Director of NEFCO.

The renewable energy sector in Ukraine is a success story

In general, NEFCO believes that the renewable energy sector in Ukraine from a technical point of view and in terms of environmental protection is a success story.

“Ukraine has everything for this sector to develop, to attract investors. There are skills and professionals who are ready to contribute to the development of this industry. As a rule, renewable energy facilities are located in remote areas, which has a positive effect on their economic development: jobs are created, local budgets are replenished, general economic activity is growing," explained Trond Moe.

Earlier, on November 30, the President of Ukraine signed a draft law that gives the Cabinet of Ministers the right to provide state guarantees for loans to NPC Ukrenergo.