Ukraine hit the top 10 countries with the fastest-growing renewable energy sector in 2019. In 2020 it became one of 5 states that develop solar energy the quickest. The total renewable energy capacity reached 9656 MW at the beginning of 2022. However, the full-scale invasion by Russia not only has stopped the sector’s development but affected it badly, while enterprises were forced to stop their activities on the verge of bankruptcy.

How hard occupiers have damaged enterprises producing renewable energy, how the government pays for the electricity supplied to the grid, and whether there is a way to save the sector - the CEO of Solar Generation, founder of the Kharkiv energy cluster Stanislav Ignatiev is telling.

The total installed capacity of industrial solar farms in Ukraine hits 6226,9 MW. About 60% of them are situated in the south and the south-east, the hotspots. That 60% is equal to 3700 MW.

According to heads of companies, the solar energy sector loses the most from the war. The reason is the large areas of industrial solar farms. Different estimates show (is being specified due to the facilities being located in the war zones) that 30-40% of the farms in the regions suffering from the occupiers are damaged, which is 1120-1500 MW of the installed capacity.

The most affected ones are located in the Mykolaiv energy hub. Solar Generation’s solar farm (22MW) was shelled and then attacked by a helicopter a week later which resulted in a missile explosion that had been left on the territory of the solar park after the previous shelling. Among other things, connecting to the grid is impossible due to the damage to 5,5 km of a 150 kV power line, which supplies electricity to Mykolaiv.

We also become aware of the complete destruction of 100% of solar farms in the Kharkiv region.

In addition, those industrial solar power plants that have not been destroyed or damaged are not working at full capacity because of the daily dispatchers’ commands to limit production during daylight hours in order to ensure the viability of the energy system. Considering this, the profitability of such facilities has vanished, keeping in mind that they are credited or refinanced by Ukrainian banks and international financial institutions. 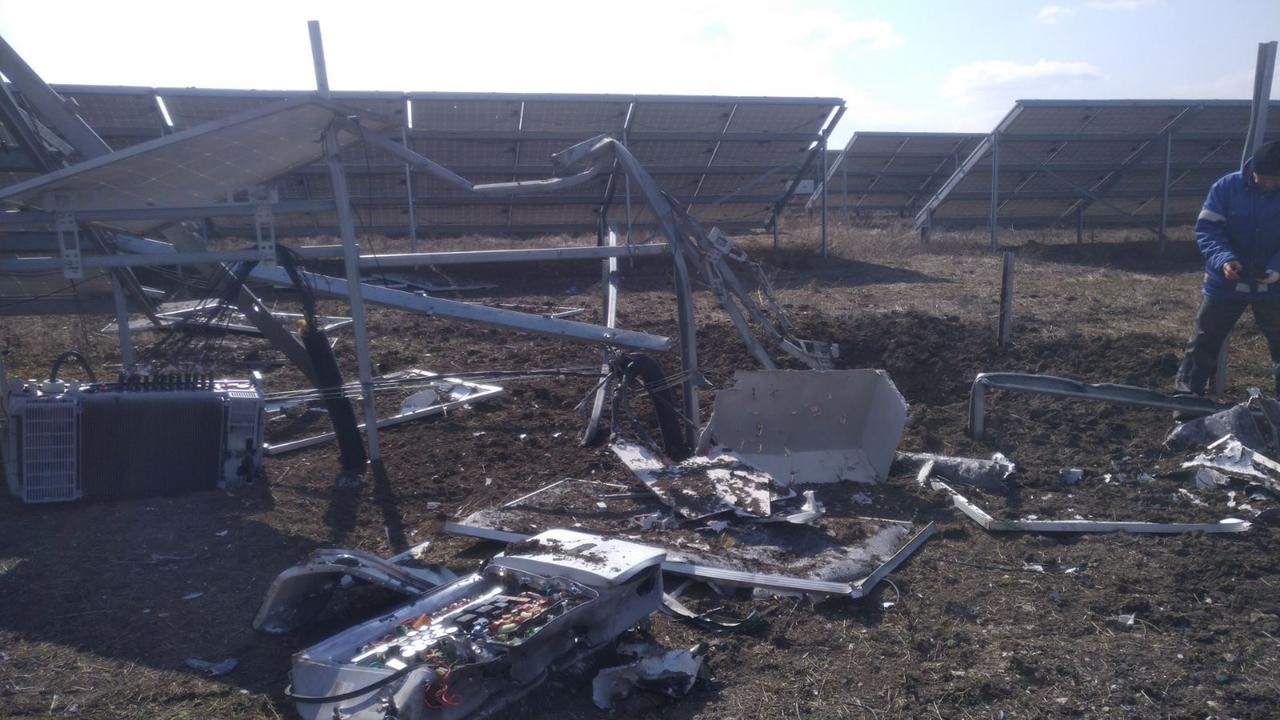 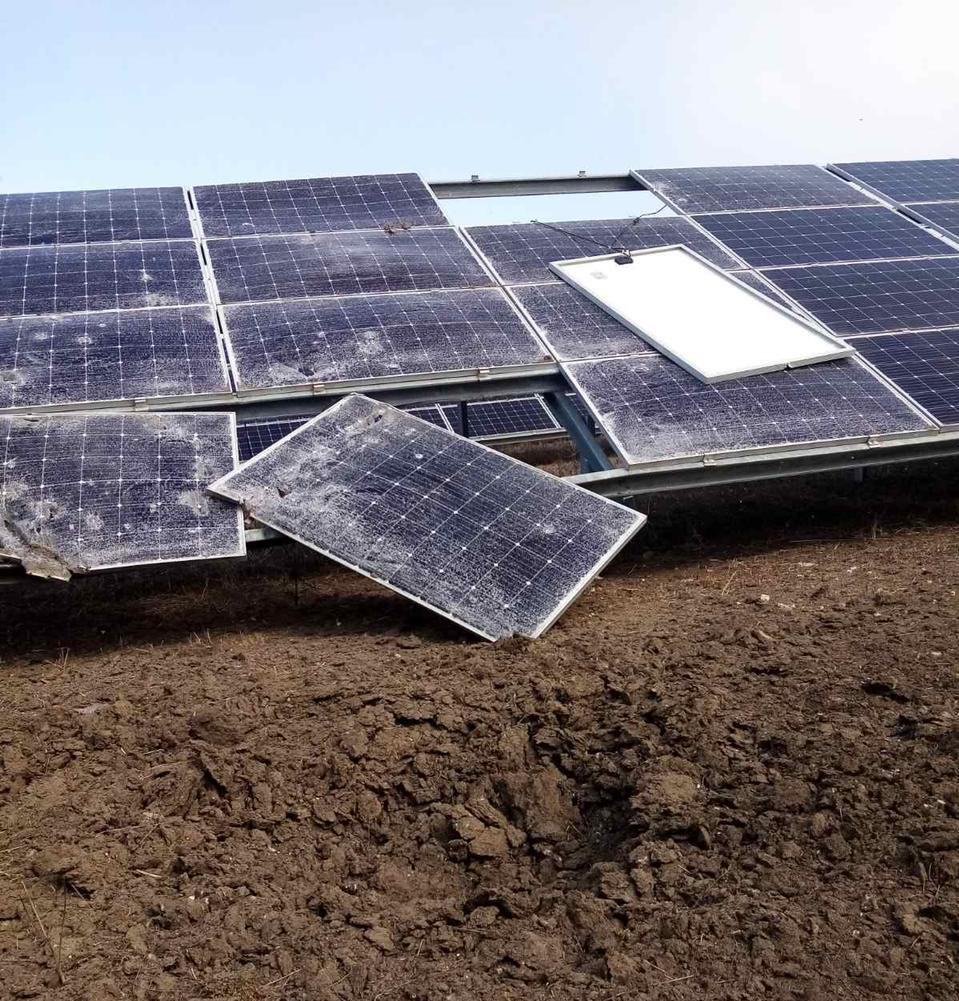 It is worth noting, that as of the beginning of 2022, 1,2 GW of solar farms were commissioned by the private households. The statistics of the private solar power plants’ locations and overlaying it with the sites of settlements being shelled in Ukraine show that about 280 MW (24%) of the installed capacity has been destroyed. 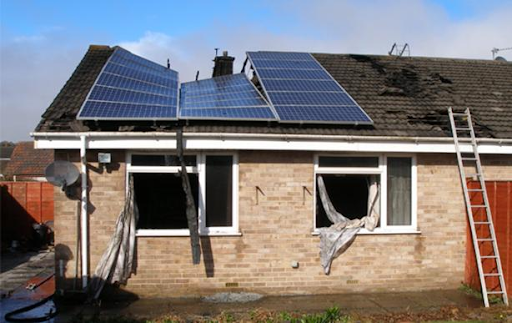 According to the Ukrainian Wind Energy Association, more than 2/3 of wind turbines have been halted in Ukraine due to Russian military aggression. Currently, 1162.5 MW of the installed capacity is not performing, 372.5 MW are still working, and situated mainly in the Odesa and Lviv regions.

All wind farms of DTEK were stopped in the Zaporizhzhia region (Botievska of199.88 MW, Prymorska-2 of 99.58 MW, Orlovska of 98.8 MW), except for Primorska-1 with a capacity of 99.58 MW. Due to damage to power lines, a 330 kV substation in Melitopol was de-energized. The Zaporizhzhya wind farm of Eurocape Ukraine LLC (98.1 MW) is not working in the region.

The South Energy wind farm (76.5 MW) was stopped, while the Dniester wind farm (partially) of Elementum Energy LLC (40 MW) and the Ovid Wind wind farm (32.67 MW), owned by the Turkish Guris, are operating in the Odesa region.

It should be noted that at least 2 wind turbines of different owners were destroyed. 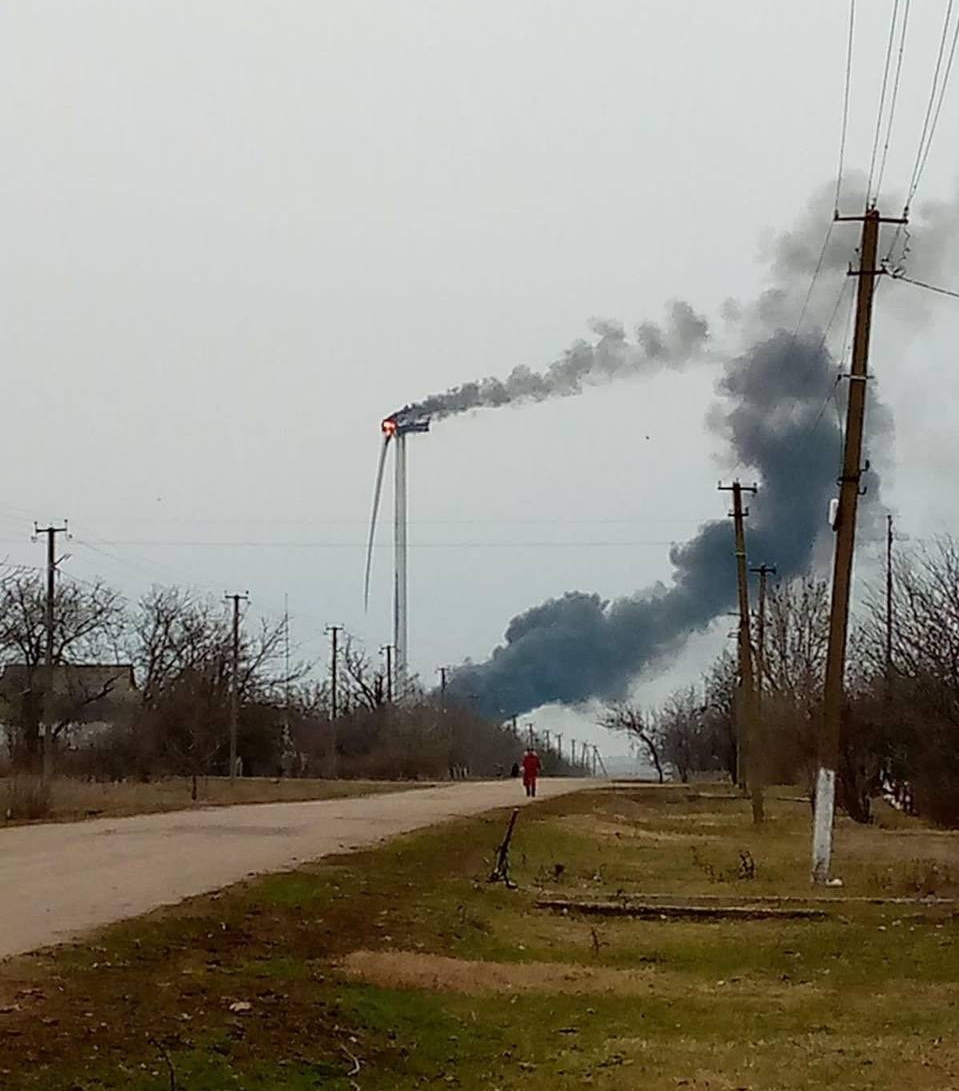 The wind turbine was damaged by shelling. Photo by the Ukrainian Wind Energy Association.

Enterprises, generating electricity and thermal energy using biomass in Ukraine have an installed capacity of 224,5 MW of which 119,1 MW are produced from biomass and 105,4 MW from biogas. The facilities are widely dispersed throughout the country in close proximity to settlements and large agricultural enterprises.

According to Stanislav Ignatiev’s estimates, 10-15% of the installed capacity had been affected by the invaders by the time this article was released. First of all, this applies to the cities that have been shelled and areas of active hostilities, which are north and south of the Kharkiv region, the Sumy region, and the Mykolaiv district, Zhytomyr.

In particular, a boiler house, which provided up to 30% of the heat supply to the city of Zhytomyr, a bio TPP on the ring road of the city of Mykolaiv, the infrastructure of the first energy-efficient village of Ukraine Vesele (currently under temporary occupation) were completely destroyed.

The boiler house in Zhytomyr was completely destroyed by shelling. Photo: Stanislav Ignatiev. 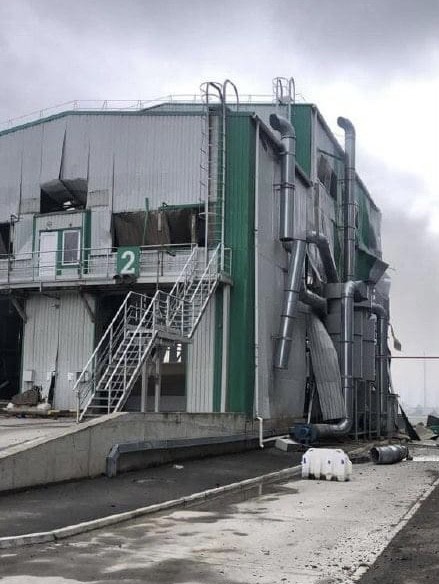 The bio TPP was damaged in the Mykolaiv region. Photo: Stanislav Ignatiev.

Among other things, leaving unexploded ordnance, and mines on the agricultural land, in forests and forest belts leads to a decrease in the level of biomass harvesting now and in the future, which has a long-term impact on the industry.

Electricity consumption decreased by a third due to a large number of damaged equipment, shutdown of industrial enterprises, internal and external migration of the population. Supported by the changing weather conditions, there is extra electricity instead of its shortage in Ukraine. That is why, almost every day, dispatchers must limit renewable electricity production (in fact, renewables must stop working) during the day.

Synchronisation of national power grids with the power system of the European Union and Moldova ensures only the stability of the Ukrainian grids through possible support of capacities and frequencies. Currently, export-import flows go through one powerline, which is not enough to save the Ukrainian renewable sector. However, the prompt accession to ENTSO-E (even as an observer member) in the future will have a positive effect on the development of Ukrainian industrial renewable energy power plants.

According to Stanislav Ignatiev, renewable energy producers are on the verge of bankruptcy, and the entire industry may cease to exist because of the regulatory documents adopted by the Ministry of Energy.

On March 3, 2022, the Ministry of Energy of Ukraine issued Order No. 103 "On settlements on the electricity market", by which the SE Guaranteed Buyer is obliged to direct all funds received from the sale of green electricity to pay off the debt to the SE NNEGC Energoatom.

By order No. 103 of the Ministry of Energy, it was decided to direct all funds received by the Guaranteed Buyer from the sale of green energy (at market prices) to the needs of other types of electricity producers.

On March 28, 2022, the Ministry of Energy published Order No. 140 “On settlements on the electricity market”, according to which, based on the results of electricity sales for the first 10 days of the billing month, the distribution of funds of the Guaranteed Buyer must be carried out as follows, with the following restrictions:

The rest of the funds from the sale of green electricity are distributed between the NNEGC Energoatom and NPC Ukrenergo.

To date, producers of renewable energy (in particular, solar and wind) receive payment for the electricity supplied to the grid, which does not even cover the current operating costs, paying taxes and mandatory payments. As for the repayment of loan payments, if there are any, the funds received, of course, will not be enough to cover those.

To minimize the impact on the economy and establishment the energy independence of Ukraine, as well as to further develop the industry aimed at abandoning Russian gas, the following low-cost steps would be effective:

1. Enable access to the new Fund for the Reconstruction of War-Destroyed Energy Infrastructure in Ukraine, set up by the European Energy Community for destroyed and damaged renewable energy facilities.

2. Support (tax holidays, rent-free and land tax-free for 5 years, preferential connections to the grids) the construction of new solar and wind power plants. The new building should be concentrated in regions where there is a real lack of electricity.

3. Preferential treatment of green energy companies on the day ahead market in order to reduce the burden on the SE Guaranteed Buyer in terms of the feed-in tariff.

4. Increase the level of flexibility and decarbonization of the energy system of Ukraine, first of all via building new energy storage and shunting capacities, in particular, using biomethane.